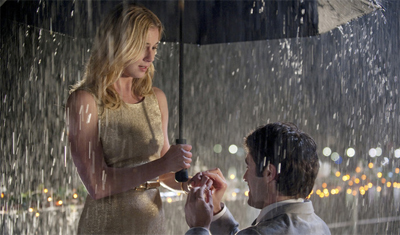 A marriage proposal! A paternity revelation! A brutal beating!

All of the soapy elements were in place during “Commitment,” the thirteenth episode of ABC’s Revenge.

In this episode, Emily (Emily VanCamp) wrestles with her commitment to enacting revenge on Victoria (Madeleine Stowe) and Conrad Grayson (Henry Czerny), even though they falsely pinned a terrorist attack on her late father,  because it means hurting the younger members of the family along the way, like Charlotte Grayson (Christa B. Allen), whose paternity causes the Graysons’ divorce to get especially nasty!

It seems that those interview tapes Emily stole from the house she burned down in the last episode aren’t just sitting on her shelf at home. Instead, she sent Conrad the one in which her father confesses on camera that he is the biological father of Charlotte Grayson.

Enraged, Conrad tells Victoria that she can accept the “pittance” of a divorce settlement he’s planning to offer her, or that they can go to court where he will be sure to let the world know that Victoria had a torrid affair with a convicted terrorist and had a baby with him.

Either way, he assures Victoria that she will end up the “desperate penniless little bitch you were when I met you.”

Poor Charlotte is kept in the dark about the identity of her real father, but a saddened Conrad tells her that she can no longer live with him, which confuses her, especially as he just offered to pay for Charlotte’s boyfriend Declan (Connor Paolo) to attend boarding school with her.

Knowing that Victoria will put two and two together and suspect that it was Amanda (Margarita Levieva) who sent Conrad the recorded interview with her father, Emily plants the rest of the video tapes at Amanda and Jack (Nick Wechsler)’s above-the-bar apartment, knowing that Victoria will want to track them down. And sure enough, a few scenes later, a sketchy guy shows up and steals the tapes from the apartment, but not before savagely beating up Jack, who you’d think would be used to random people just strolling into his apartment at any given time. (He didn’t seem surprised to see Emily there earlier in the day, either.)

Meanwhile, Daniel (Joshua Bowman) takes a blind-folded Emily to the exact spot where they met in the pilot episode and even wears the jacket that Emily purposely spilled her drink on. A woman with any kind of intuition would have realized the moment that the blind-fold came off that she was about to get proposed to, especially considering the presence of a live string quartet, but Emily genuinely looks shocked when Daniel gets down on one knee and asks her to marry him, just as a thunderstorm breaks over their head. (Although even when they ditch the umbrella, the special effects team makes sure that the water only rained around Emily and Daniel’s head. Clearly, you can’t have your lead actors actually getting wet while speaking their dialogue!)

Madeleine Stowe’s uncanny ability to blankly stare in a dramatic fashion comes in handy several times during this episode. She blankly stares at Emily and Daniel when they announce their engagement. Later, she gives Amanda the same evil star, when she invites her over for strawberries and crème fraîche in order to nab a DNA sample from her. For whatever reason, Victoria is somehow not convinced that Amanda is actually David Clarke’s daughter and when Amanda bites into a strawberry, something that she remembers the real Amanda was allergic to as a child, it only furthers her suspicions.

However, luckily for the real Amanda, Victoria’s lawyer, who she put in charge of the DNA test, is actually one of the few people who met Emily as an adult when she was still “Amanda” and helps her out by switching the DNA samples, so that the match between fake Amanda and Charlotte comes back positive! However, after meeting Emily for a secret rendez-vous under a dock, he tells Emily that he “can’t be involved with such violence” and that she should reassess what she’s doing, especially given what happened to Jack.

After a brief talk with Nolan (Gabriel Mann) who tells her that she has Jack’s blood on her hands, Emily decides that she will “press pause” and find another way to level Victoria without marrying Daniel. But not before she lies to Amanda and tells her that Victoria purposely sent the hit man to beat up Jack, which finally convinces a teary Amanda to leave Southampton for good.

“It isn’t our choices who distinguish who we are, it’s our commitment to them,” says Emily during the show’s opening voiceover. However, after Victoria decides to lie to Daniel and tell him that Charlotte was conceived from David Clarke raping her, Emily decides to double-down on her plotting in the end. Clearly, Emily is not going to let Victoria get away with slandering her father’s reputation any more than she has already!