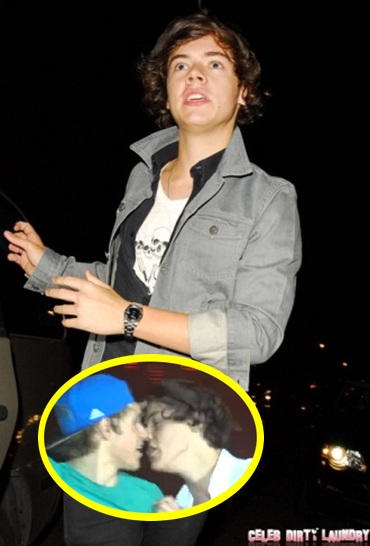 I’m going to give you ten seconds to calm down. He might be gay. He might be straight. He could be anywhere in between. However, when you put all of the evidence together, it seems that Harry might not be totally honest with his fans!

After covering up a naked pic scandal (a photo with blurred face, big brown hair, and a dog tag necklace), Harry’s PR people scampered to make sure the world (and fans) knew that the photo of Harry and Niall with lips inches apart is just a weird angle of them whispering. Into each other’s mouths. As we all do when secrecy is required.

With every boy band in history (and most male performers in general) there have been gay rumours. 98 Degrees, N Sync, Backstreet Boys, Hansen, solo artist Mika—the list goes on. I think there’s actually a formula: divide sequins used in tour wardrobe by paparazzi photos of star with female companion, and if the answer is in a certain range, you get high, medium, or low probability of sexuality. Or something like that. I can’t quite remember. Math was never my strong suit at university.

However, that “whispering” photo, which has certainly calmed down a bit in the news, is pretty . . . unique. Do you whisper to your friends that way? It definitely is a red flag for us! No matter the answer, we love Harry Styles. We love his flippy hair, his plump lips, the way he looks into that actress’s eyes and sings, “baby you light up my life like nobody else . . .”

I love that he and the other members of 1D try to promote hair flipping too. I thought it was so . . . nineties, but they’ve really reinvigorated the movement as something that all men find overwhelming. Nothing like a blast of perfumed hair to the face.

All that to say: Harry, if you’re gay, great. If you’re straight, great. We love you no matter who you are. But, ignore the rumors and think on the bright side: the coming out autobiography title writes itself, My Direction: My Story of Singing, Dancing, and Learning to Love Myself. Win win!