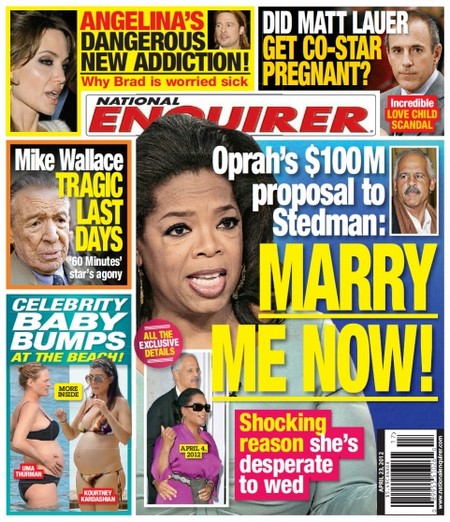 Oprah Winfrey has made her long-term lover Stedman an offer he can’t refuse: marry me for $100 million!  Oprah is desperate to finally be married after the layoffs and incipient failure at her OWN TV network has driven the celeb to her wit’s end.  Medical reports indicating that the Oprah has less than 2 years left to live have contributed to her need for the security of marriage.

This wedding story is on the cover of the April 23 edition of the National Enquirer.  The Enquirer promises to reveal all the shocking details of Oprah’s $100 million proposal to Stedman in the print edition.

We are also promised a gritty exclusive revealing Angelina Jolie’s latest addiction – apparently Brad Pitt is freaking out over this latest trouble with crazy Angelina.  What do you suppose Angelina is up to this time?  Hopefully she is not hanging out with Demi Moore doing whippets (nitrous oxide).

Then The Enquirer asks the cover question:  Did Matt Lauer Get His Co-Star Pregnant… we’ll just leave that potential nightmare alone.  We will also get to see a pictorial of all the celeb baby bumps at the beach – what fun!

Of course Rihanna wants to play Whitney Houston in a biopic on the late singer.  Can Rihanna act?  She is starring in the new movie ‘Battleship’ but that doesn’t mean that she can handle a serious role.  Besides, do we really want to see Hollywood and Whitney’s greedy family profit off of Whitney’s tragic death.  This will almost certainly be a crappy movie no matter who plays the lead.  Can’t Rihanna just go away for a little while… doesn’t little Bobbi Kristina want to play her mom anyway?

All this and more awaits the eager reader when they check out the print edition of this week’s Enquirer!  I am rushing out for my copy ASAP!