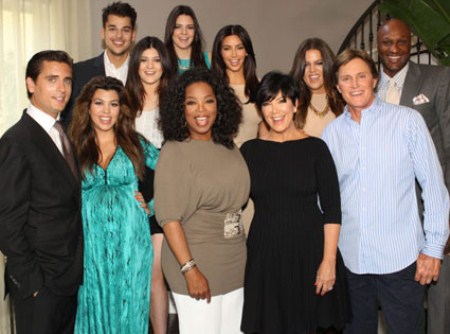 During the interview, Oprah asks Kim if she would be where she is today if she didn’t do a sex tape (I was kind of wondering about that myself) and if her marriage to Kris Humphries was a stunt! You got to love Oprah, this women doesn’t hold anything back with her questions, she even asks Kris if she ever felt that she was “pimping” out her kids.

Meanwhile, Kim reveals that she really feels that she is finally growing up, at 31 years old! And, she loves to be finally dating a man that is old than she is, Kanye West.

No topic is off limits tonight on “Oprah’s Next Chapter”, everything you have always wondered about or wanted to know will surely be revealed about the Kardashians, you don’t want to miss it!

Stay tuned for our live coverage of  OWN’s “Oprah’s Next Chapter” tonight at 8 PM EST! Meanwhile, while you wait enjoy the previews and hit the comments, let us know what you think of Oprah sitting down for a candid chat with the Kardashians!

RECAP: This it folks, it’s time for Oprah to visit the Kardashians at the Jenner home. Love them or hate them, millions follow they’re every move. They have 30 products to their name, a multi million dollar empire with a show in their seventh season and they just signed on for two more.

Oprah: Was it a dream to grow up famous?

Khloe said she was never drawn to it, she just wanted to be successful.

Oprah: Is everything you do to be more famous?

Kourtney: That is still something I am not comfortable with, being famous.

Kim and Robert: We don’t like the words “famous” or “celebrity”.

Oprah: How much of what we see on camera is an enhanced part of you?

Kim: They are real situations, you know Kourtney being pregnant and my breakup are examples.

Oprah: When you are putting on the show what do you most want America to see?

Robert: There is a lot of negativity on the show, a lot of people like to knock us, I want to show them that we are just a real family.

Oprah: How did your mother’s divorce impact all of you?

Kourtney: It still affects my relationship today, I am afraid of marriage as a result.

Kim: We always protected our dad, because it wasn’t his fault. –

Oprah: How would your father feel about this series?

Kim:  I thinks my father would be so excited and proud of us.

Oprah: You guys call your mom, momager, what do you say when people say your mother is pimping her children?

Kim: We needed to hire a manager, what better way to have someone you trust.

Oprah: What does your mother say to you about sex?

Kim, I was so opened with my mom that the first time I wanted to know she told me everything and I was 15 at the time.

Oprah: Could this have happened if you all were not pretty kids?

Kim: I think it wouldn’t have happened if we were all skinny models.

Kim: There is a lot of heart, we love each other and we love what we do, we don’t make excuses.

Oprah: how much of it is real?

Kris: what you see on our show is 22 minutes of our entire day.

Oprah: you came up with this idea for the show by watching the Osbournes?

Kris: Yes I did, at the time we had two boutiques.

Oprah: What about Kim’s sex tape?

Kris: I was hurt, cried myself to asleep for a few nights, but I know she is and she’s a good person.

Oprah: How are you all able to manage the ego trip?

Kris: We don’t think like that, it is just work and we do it.

Oprah: What is the worse thing you have ever heard?

Kris: I exploit my children, or pimp my kids.

Kris: Yes I did, I had four beautiful children with him and I don’t regret revealing that I had an affair.

Oprah: Is it true that Bruce asked Robert for your hand?

Kris: Yes, at the end of Robert’s life, we were best friends.

Oprah: What about your relationship with OJ Simpson and his wife Nicole?

Kris: There was a lot of confusion at the time but Robert defended OJ because he wanted to be loyal to the friendship.

Oprah: Do you have doubts about OJ’s innocence?

Kris: I don’t feel comfortable answering this, I don’t want to say what my opinion is on this because of his children.

Oprah: Robert was gone in eight weeks from cancer, you wrote him a letter before he died.

Kris: I felt like I hadn’t communicated enough with him, I needed him to know how much he meant to me and how he shaped my life. That letter was the most rewarding thing I have ever done in my life.

Oprah: When people say your last marriage was a stunt, how does that make you feel?

Kim: Everyone who knows me knows I fall fast. I don’t do anything for ratings.

Oprah: The choice to have your wedding on TV was for ratings:

Kim: I didn’t and the huge risk in ending that marriage could have affected ratings, but I followed my heart, so that proves I don’t do things for ratings.

Oprah: I think it must have been really bad to end in 72 days.

Kim: I think when people first fall in love everything is great, but for me and my ex, we didn’t move in together and then I saw things that I didn’t like and I don’t really want to talk about it.

Oprah: Did you know that day, when you married him?

Kim: No, I didn’t but my mom asked the night before, do I want out.

Oprah: Was there something drastically terrible that happened?

Kim: No, he is a good person and I will always have a place in my heart for him.

Oprah: Were you bored?

Kim: Yes, but I didn’t leave him for that.

Oprah: How hard was it to say you were getting out of it because of who you are?

Kim: My mom told me to cancel everything and go home and I would rather be beaten up in the media than continue with something that I didn’t want. I am sorry and apologize if I hurt anyone

Oprah: When you apologize for anyone you may have hurt, is that Chris?

Oprah: Were you disappointed in yourself?

Kim: Yes, but I do think things happen to bring you where you are supposed to be, a real lesson was learned.

Oprah: Would you be where you are if there were not a sex tape?

Kim: I think I am aware that that was how I was introduced to the world, but I had to work ten times harder to have people see the real me. I felt humiliated, why would anyone put that on their family? I didn’t release the tape. I have always been concerned about my family. Just imagine the conversation I had to have with my grandmother about this. I don’t know what I would have said or what I would have done if my father was alive.

Oprah: You said that the failed marriage taught you so much, do you regret the tape or are you grateful for that experience?

Kim: If I had one regret, it is that tape. I have to live with the choices I made, in both situations. Where I am at now, I am such a calm different person and my life is not always about me anymore. I am who I am now and I am happy.

Oprah: It feels sometimes selfish and self-centered how the Kardashians are portrayed to the world?

Kim: I think our fans really get our personalities, but there are haters but I think that because of my experiences I don’t care as much anymore. I feel like I have had an ephiany in the past year for what I have been through. I thought my relationship with Chris would work, when I realized it wasn’t I would have rather saved everyone’s heartache.

Oprah leaves us with the question, is Kanye West the new fairy tale?