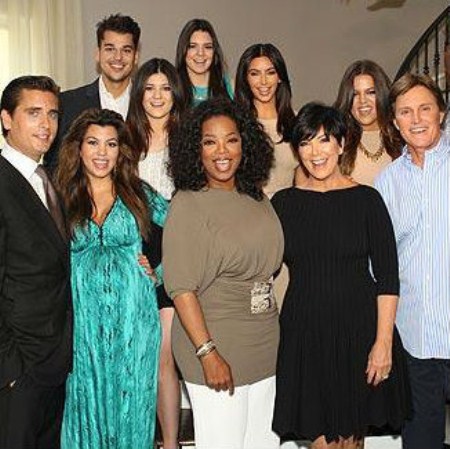 During part 1, Kim revealed that she had sex at an unbelievable young age of 14, but not to worry, momager Kris made sure she was well prepared, although she forget to mention abstinence; which no doubt led Kim to doing a sex tape.

Oprah was relentless with her questions and even brought up the fact that Kim’s wedding was a publicity stunt. Kim still claims that it wasn’t to which Oprah then slammed her with, if it wasn’t then why did she decide to film it. Kim was backed right into a corner and then to diffuse the whole topic, Kim said that if she was worried about ratings she wouldn’t have ended the marriage because that could have caused a huge negative impact to ratings.

Then Oprah hit all the Kardashian kids about how some people say that Kris is pimping out her kids. Kim was quick to react and said that they needed a manager, what better way than to have someone you trust.

Last week we got to see more of momager, Kris and Kim; this week the rest of the family gets more of the spotlight along with Kim when we find out if Kanye is Kim’s new fairytale. If you missed last week’s episode, you can read the full recap HERE.

Stay tuned for our live coverage of  OWN’s “Oprah’s Next Chapter” tonight at 8 PM EST! Meanwhile, while you wait enjoy the preview and hit the comments, let us know what you think of Oprah sitting down for a candid chat with the Kardashians!

RECAP: The interview with the Kardashians continues and there is so much more to talk about.

Oprah: Is Kanye West your fairytale?

Kim: I’ve known him, we met almost a decade ago, we have been friends for six or seven years and it is very comforting to find someone that has gone through the same things that I have gone through. I am in a really good happy place. I don’t know what it took for us to finally get together.

Oprah: Was he comforting you, was he being a friend?

Kim: We have always been attracted to eachother and one day it just took me by surprise.

Oprah: Does he fill all your categories?

Kim: He does and I am reluctant to talk about because of my failed relationships.

Oprah: How many times did you talk to him today?

Oprah: Are you and Kanye together for a publicity stunt?

Kim: No, I couldn’t sacrifice my heart for a publicity stunt.

Oprah: Did you both sell your houses.

Kim: No, but I am actually selling mine to get one that is better suited to me.

Oprah: Did you buy him a Lamborghini?

Oprah: Does his bad boy image scare you at all?

Kim: No, I hardly drink, I go to church on Sundays, I am so removed from my image and I feel the same way about him, he is not a bad boy.

Oprah: Does he feel  like this is a permanent relationship?

Kim: I definitely feel like I first have to get divorced, but to have him in my life this way says a lot about us.

Oprah: Do you know that you are beautiful?

Kim: I hate talking about myself, I am very critical of myself, I feel pretty but I would never use beautiful.

Oprah: Do you work at keeping yourself look this pretty?

Kim: Yes, I am at the gym every day, I take care of my skin really well.

Oprah: Can I trust a Tweet from you regarding a product?

Kim: Yes and I don’t get paid for every Tweet, unless it’s in the contract.

Oprah: What are the most excited about in the Kardashian empire?

Kim: Clothes, fashion has always been our thing.

Oprah: Where are you most at peace?

Oprah: Where are you happiest?

Kim: On holidays at my mom’s house.

Oprah: If it were all to go away in the next year, would it be all well with your soul?

Kim: Yes, it means nothing to me, the meaning for me now is not about myself.

Oprah: What surprised you most about marrying into this family?

Oprah: People think the whole show is your life.

Khloe: I am thankful for it because we film together and I am so grateful for it.

Oprah: You knew that marrying Lamar after knowing him for one month?

Khloe: Yes I did and Bruce didn’t like it so I asked my brother to walk me down the isle, but then I felt guilty because he was so supportive.

Oprah: Do you feel pressure to make this marriage work because it’s in the public?

Khloe: No, this is my marriage.

Oprah: Do you read what people write about you?

Khloe: I don’t go out and read about it, but it finds me.

Oprah: Are you trying to get pregnant?

Oprah: I have heard that you are taking a break from your own show, did it distract from Lamar’s career?

Lamar: I have to re-prove myself  in my career, but the show didn’t have any effect on my career.

Khloe: We pray every night and that is what keeps us strong, we even pray for our enemies. Everything is not going to last forever, but we try to enjoy it in the moment. I keep my beliefs true and I am not going to change who I am.

Oprah: You are nine months pregnant, do you have a name for the baby?

Kourtney: We do, but we are not sharing it until she is born.

Oprah: The person who is the blacksheep is usually the most sensitive, is that true Scott?

Scott: Yes, I am an only child, I put up a front even though I am insecure about a lot of things.

Oprah: A lot of the behaviour that is rude, is that your insecurity?

Scott: Yes, even though I can’t take a lot back.

Oprah: What are you most disappointed about?

Scott: Making Kourtney cry on camera and I am not claiming not to be an asshole.

Oprah: What was it like coming into this family?

Oprah: Are you working on being a better person?

Scott: Yes, especially since being a father.

Oprah: What about when you were in the restaurant in Vegas and put the money in the waiter’s mouth?

Scott: It was disgusting and I was clearly wrong doing it.

Kourtney: It helps even if I go into it hating him.

Oprah: Can you tell me about your family?

Scott: My parents had trouble having children and I was like the miracle child.

Scott: Yes and I love waking up and feeling decent now instead of regret and anxiety for what I did the day before.

Oprah: What is your dream for your new daughter?

Kourtney: I want her to be happy.

Oprah: Do you feel like you are buried in the valley of estrogen?

Oprah: What did you think about Kris doing all this reality TV?

Bruce: I did reality TV with Howard Cosell before Kris, so I knew what it was like.

Oprah: Did you sometimes wish it wasn’t all out there.

Oprah: What about Khloe and Lamar?

Bruce: I was very upset, I found out on TV about them. They are a great couple now and it can happen that relationships work even after not knowing each other for long.

Oprah: You were the most famous athlete?

Bruce: Yes and I have my medals.

Oprah: You have been a part of the fame game for a long time, was it ever hard to let go?

Bruce: It was a very bittersweet moment, I was really satisfied but when I was at the top, I walked away. Six years all I did was train, but in a way I was happy about it. I have never displayed all of my stuff, I didn’t want the kids to think they had to measure up to me.