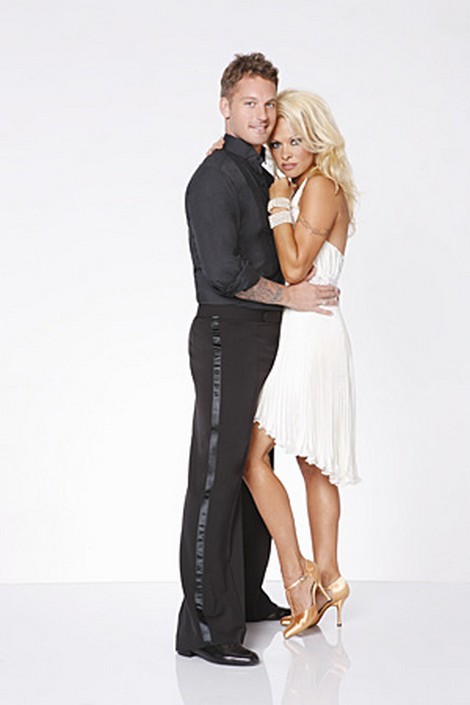 Pamela Anderson danced the Cha-Cha-Cha to “You Know I’m No Good” by Amy Winehouse for her first performance of Dancing With The Stars All-Stars 2012 Season 15.  All 13 couples will hit the stage performing either the Cha-Cha-Cha or the Foxtrot to impress the judges and viewers at home, hoping they’re not the first couple sent home.   We recapped the tonight’s show for you and if you want to see how all the couples did go HERE!

Pamela Anderson and professional dancer Tristan MacManus dancing the Cha-Cha-Cha.  Pamela had this to say about dancing this week, “I don’t feel ready. I feel like so much work left to do..to learn. This is the beginning of something great- I love it!”

Judges Comments:  Len: ‘It was a bit like a kid on a bike when you take the training wheels off you didn’t fall off and you made it through it.” Bruno: “Pamela you look like a girl who can go all the way.  You are a good performer, you can perform and you can do it, but there was not enough work there.  You need to work harder.” Carrie Ann: “You were definitely living the drama.  The body was not quite there, we want to see that booming body get there.”

Watch the video below and let us know what you think? Do you think that Pamela did enough to win the Mirror Ball Trophy? Sound out in the comments below!