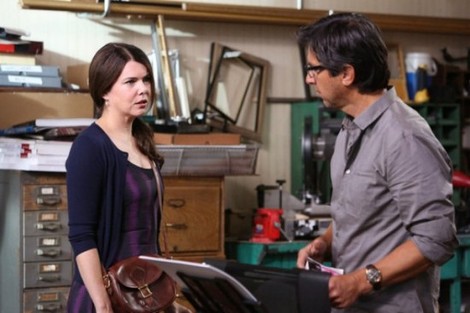 NBC’s popular drama Parenthood returns tonight with a whole new episode. Tonight’s third episode of the 4th season is called “Everything Is Not Okay.” On tonight’s show Kristina and Adam cope with emotional news and turn to family and new friends for support. Meanwhile, Zeek’s behavior with his grandchildren triggers doubts concerning his health and Sarah confronts her new boss and receives an unexpected outcome. If you missed last week’s premiere episode you can read our full and detailed recap here!

On last week’s show “Left Field” as the family adapted to their new son, Julia communicated her love in an unusual way to Victor. Meanwhile Crosby and Jasmine worked as a couple to add structure and boundaries to their marriage. Also, Sarah’s new boss Hank unexpectedly helped her understand Drew’s (Miles Heizer) feelings.

Tonight’s episode looks like it is going to be great and you won’t want to miss it, so be sure to tune in for our live coverage of NBC’s Parenthood at 10:00 PM EST! While you wait for our recap hit the comments and let us know what you thought of the premiere of Parenthood last week?

Tonight’s episode: Max is at school and loves that he has his own money and can buy whatever he wants, but when he gets to where the vending machine used to be, it has been moved and he gets upset.

Adam and Kristina are at the doctors for her first cancer checkup when another patient starts talking to Kristina and offers her card for support, if she needs it down the road.

Sarah is at the studio when a client comes in, they are getting married and are looking for a photographer. The couple want some candid shots of before the ceremony and all the way up to when they release the doves.  Hank turns off the job and tells the couple that he has already booked a “me” day and cannot do it. When they leave, he tells Sarah he doesn’t do weddings.

Zeek picks up Max from school and he tells him all about the school moving the vending machine. Zeke does a u-turn and gets pulled over by the police. The police tells Zeek that his licence is expired for over a year and when Zeek tries to negotiate with him just to give him a warning, he gets out of the car and after a few warnings to get back inside, he gets hand cuffed.

Kristina is in the doctors’ office and the doctor tells her it is a small cist and regardless they need to do a lumpectomy. Kristina tries to ask questions, but the doctor is preoccupied with his cell phone and she looks frustrated.

Sarah is home, she is upset that Hank will not do the wedding.

At the police station, everyone is there to pick up their kids and Zeek is still angry that he was arrested.  Afterwards, Crosby tells Sarah, Adam and Julia that Zeek is on heart medication and maybe that is what is impairing his driving.

At home, Adam tells Kristina that he really didn’t like the doctor, he was too distracted and not focused on her.

Amber lost a job for the studio because Adam wasn’t answering his phone and Crosby was busy in the studio, Adam rips into her and blames her.

Kristina and Adam meet with another doctor that is more patient and attentive. At school, Max is still obsessed with the vending machine.

Sarah goes to see Hank and tells him that she doesn’t care if he tanks her business but she wants him to be polite to her. Hank tells her that he hates weddings and Sarah calls him a true artists and somehow he thinks if he does weddings he will be a failure.

Adam, Crosby, Julia and Sarah meet with Zeek about his expired licence, he says that it just slipped his mind. Zeek asks them if they think he would ever intentionally put his grandchildren into danger. Adam tries to say something about him being handcuffed and Zeek walks out. Camille walks in and tells them all she is ashamed of them, he simply forgot to renew his licence and not ready to be put out to pasture for it. Adam goes to see Zeek and tells him that he knows about his heart condition,

Sarah is home and is still frustrated over Hank, Mark has had his fill hearing about Hank and asks her if she wants to talk about something else.

Max won’t stop talking about the vending machine, his friend tells Kristina and Adam that he wants to go home because Max is obsessed with skittles.

Zeek and Camille are out driving around town, Camille is helping Zeek go over his driving so he can pass his test.

At the studio, Amber is trying to get the burnt coffee smell out of the place and it’s really late, Crosby tells her to stop and she explains how angry Adam was at her. Crosby invites Amber into the booth tomorrow, to teach her the ropes.

Adam is home, he is looking at the laptop to the page that Kristina was reading and it’s all about cancer. Meanwhile, Kristina is in the bathroom looking at her breast and starts crying.

Adam sits down with Max and tries to teach him that he needs to compromise with his friend Micah but all Max can thinks about still is the vending machine.

Kristina actually called the women from the doctor’s office that also has cancer, she meet with her for coffee. Kristina tells her how she didn’t like the doctor because he was on a cell phone, it turns out that he was on the phone with his patients, he gives them his private cell phone number to call him.

Hank goes over to Sarah’s house and asks her if she can be ready soon to go to the wedding, he has decided to do the shoot.

Adam asks Amber to pick up Max at school, she tells him she can’t do it because she made a commitment to be in the studio with Crosby. Adam doesn’t want to listen to her and this prompts Amber to tell him that she doesn’t want to just be a girl Friday and have him blow her off all the time. Adam tells Amber that she is right, he then goes on to tell her that Kristina is sick and he’s sorry that he has been acting like a jerk. Adam won’t give her the details, but tells her that he really needs her help.

Amber picks up Max from school and he is disappointed because he had something he wanted to tell his mom. Max starts telling Amber about the vending machine.

Zeek went for his driving test, he got 98 percent.

Hank and Sarah are at the wedding and they enjoy a glass of champagne. Sarah tells him that she is proud of him for doing the job. Hank reveals to Sarah that he was married before, she tells him that she thought that she was going to be married forever. The two toast to the bride and groom.

Kristina tells Adam that she wants to go back to Dr. Bedsloe, she’s done her research and she wants him to do her surgery because she trusts him. Kristina goes on to tell him that she knows he is trying to make everything right for her, but he needs to let her be scared. Max walks in on them and announces that he is going to run for student council president so he can get the vending machine back in the school.