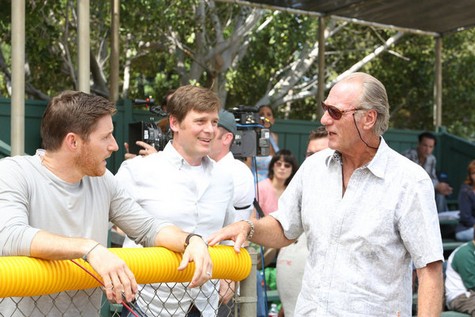 NBC’s popular drama Parenthood returns tonight with a whole new episode. Tonight’s fifth episode of the 4th season is called “There’s Something I Need To Tell You.” On tonight’s show Kristina divulges her health news to the family, who rally around her. Meanwhile mounting anxiety and a work incident force Julia to prioritize her life and make a huge decision If you missed last week’s premiere episode you can read our full and detailed recap here!

On last week’s show Jasmine (Joy Bryant) and Crosby (Dax Shepard) worked as a parenting unit to teach Jabbar (Tyree Brown) an emotional lesson earlier than expected which almost changed the family dynamic. Despite Adam’s (Peter Krause) reservations, Kristina (Monica Potter) encouraged Max (Max Burkholder) to extend himself even though she was too preoccupied to help him.

On tonight’s show Kristina (Monica Potter) divulges her health news to the family, who rally around her. Meanwhile mounting anxiety and a work incident force Julia (Erika Christensen) to prioritize her life and make a huge decision and Joel (Sam Jaeger) becomes nervous for Victor’s (Xolo Mariduena) performance at his first baseball game. Sarah (Lauren Graham) is caught in a sensitive moment with Hank (guest star Ray Romano) and demands a conversation. Also, Crosby (Dax Shepard) questions his ownership share in the Luncheonette.

Tonight’s episode: Julie is working and stuck there, she can’t go to Sydney’s recital. Sydney is upset, says she hates her mom and Joel is trying to cope.

Crosby and Jasmine are going over the bills and finds out that Adam is making more than Crosby in the business. Jasmine is not happy about it and wants Crosby to speak to Adam.

Amber drops by the Braverman’s to bring something for Max because she head that he is running for class President. Kristina knows there is another reason that Amber is there and asks if Adam told her anything. Kristina and Amber sit down and she assures her that she is going to be ok.

Hank is showing Sarah how to develop photos, he tells her that her daughter Ruby wants to visit him again and thanks Sarah. Hank makes a risky move and kisses Sarah, it is quickly over but Sarah is clearly shaken.

The next morning, Joel wants to know what is going on with Julia that she is staying at work late at night. She tells him that she screwed up, her company can get sued and she could lose her job. Victor walks in and asks Julia if she will be at his first baseball game later in the week and she says yes, Sydney is not impressed.

Kristina approaches Adam and tells him that she knows he told Amber and she is happy he did because it is time to tell the family, Haddie first.

Sarah has a dream and is woken up, she wants to go jogging and all the way tells Mark that they have the greatest relationship.

Crosby is in the office with Adam who knows something is on Crosby’s mind. Crosby starts the conversation about money, Adam turns him down flatly to get more and says he will discuss it at the end of the year.

Krisitna and Adam are talking to Haddie on live video chat, she knows something is up. They tell her that Kristina has breast cancer and it’s no big deal, she’s going to be fine. Haddie starts crying and wants them to promise that they will call her and let her know how things are going.

Julia tries to get herself out of her predicament at work and blames the fact that she recently adopted a nine year old boy.

Zeke heads to the local VA and finds out that Ryan had a job opportunity and didn’t show up. Zeke heads over to his apartment and gets the brush off.

Haddie calls Adam and tells him that she really can’t stop thinking about her mom, she is having a hard time focusing. Haddie is frustrated because her parents aren’t giving her any information; Adam tells her the truth about the size of the tumour, the lumpectomy and the biopsy. Adam tries to hold it together the best he can on the phone and promises Haddie that he won’t keep her in the dark. Kristina and Adam tell Max about her cancer, but Kristina wonders if he understands.

Julia is burning toast, the kids are screaming and she’s now burning a pan on the stove, Joel walks in to find her breaking down and she collapses to the floor then tells him that it’s too much and she can’t do it anymore.

Camille and Zeke are enjoying some quiet time together and she tells him that it’s good that he went to see Ryan, regardless of the outcome.

Max asks Amber if she is a grown up and she says she thinks she is, but Max is confused because she doesn’t look like one. Amber tells him that she has a job, she has a car, she pays bills and does stuff on her own, so she’s a grown up. Max then asks her when she is getting married and she tells him that she hasn’t met the right person yet. Then Max tells her his mom has cancer, but he doesn’t want to talk about it.

Sarah is having lunch with Hank at the studio and tells him that she is having a hard time not talking about the kiss. Hank tells her it’s nothing, she just got too close. Hank goes on to tell her that she’s funny, she’s pretty, she’s nice and he loves to talk to her; he knows she has somebody and wants to leave it at that.

Zeke goes back to Ryan’s apartment and tells him that he was rude to him, then invites him to baseball.Ryan sits beside Amber, do I see a future love connection there?

Zeke is ticked off with the coach, Victor hasn’t had a chance to play and he’s not happy about it. Camille also gets after the coach and Victor is finally called to bat. Victor actually has a home run and the family is going wild. Victor is thrilled, the whole team is congratulating him and Joel couldn’t be happier for his adopted son.

Julie has to face the music at work for what she did. Leon is upset at what she is costing the firm, it is a multi million dollar screw up and it’s a rookie mistake. Leon tells her that she has to tell them that this is never going to happen again and she will focus on her clients. Julia tells him that she is not 100% committed, not now anyway. She thanks them for the last nine years and quits.

Amber is talking to Ryan over a soda and the two are obviously attracted to each other, I can wait to see how this plays out.

Sarah asks Mark to move in together, she is obviously pushing the relationship forward to cover her feelings for Hank.

The family is all together sharing a meal after baseball and Haddie walks in, Kristina is thrilled and  so is Adam. Kristina turns around to the family and tells them that she has cancer and even Ryan, who doesn’t know her, is crying.

What did you think of the show tonight? I loved that Hank made a move on Sarah and I can’t wait to see how this plays out. Personally I hope Sarah dumps Mark and moves on with Hank, they suit each other better. There were so many great moments tonight, it’s hard to pick a favorite, so I will list my three; Victor finally fitting in, Julia quitting her job to be with her family and Haddie surprising her mom.

Parenthood returns in two weeks when Kristina goes for the surgery, you want to miss it so don’t forget to come right back her to Celeb Dirty Laundry when we live blog the episode.