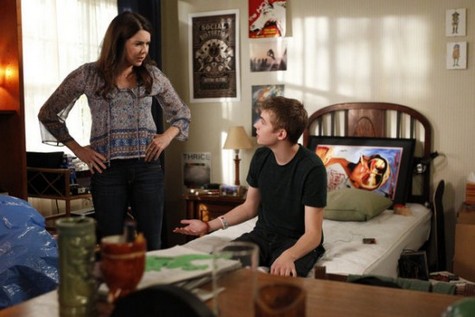 After a one week hiatus NBC’s popular drama PARENTHOOD returns tonight with a whole new episode. Tonight’s sixth episode of the 4th season is called “I’ll Be Right Here.” On tonight’s show Kristina is at a loss when she learns Max must give his speech in his bid for class president on the same day as her surgery as Adam struggles to contain his nervous energy. If you missed the last episode you can read our full and detailed recap here!

On the last show Kristina divulged her health news to the family, who rallied around her. Meanwhile mounting anxiety and a work incident forced Julia to prioritize her life and make a huge decision and Joel became nervous for Victor’s performance at his first baseball game. Sarah was caught in a sensitive moment with Hank and demanded a conversation. Also, Crosby questioned his ownership share in the Luncheonette.

Kristina (Monica Potter) is at a loss when she learns Max (Max Burkholder) must give his speech in his bid for class president on the same day as her surgery as Adam (Peter Krause) struggles to contain his nervous energy. Meanwhile, Drew (Miles Heizer) is upset with Sarah’s (Lauren Graham) decision to move them into Mark’s (Jason Ritter) apartment, Joel (Sam Jaeger) is concerned for Julia’s (Erika Christensen) health and well-being as she attempts to be “super mom,” and Ryan (Matt Lauria) asks Amber (Mae Whitman) out on a date.Craig T. Nelson, Bonnie Bedelia, Savannah Paige Rae, Tyree Brown, and Xolo Mariduena also star; Sarah Ramos guest stars.

Tonight’s episode: Haddie wants to help her mom with dinner, but she doesn’t want it, basically Kristina doesn’t want to be treated differently because she has cancer. Max announces that he has a speech and they are counting the votes for class president the same day that Kristina has her procedure schedule for.

Adam is at work and Crosby can see that he is stressed so he gives him a massage.

It’s moving day, Sarah is freaking out because she is paying the truck by the hour and Drew is stalling – he tells her that he doesn’t want to go.

Hank drops by to see Sarah and tells her not to quit, he finds out quickly that she took a day off work to move.

Amber is working and Ryan drops by and tells her it’s just as “nifty” as Zeek said it would be, then he tells her that he is really interested in her and would like to go out with her, she says yes.

Kristina expresses to Max that she and Adam are really bumped out that they are going to miss his speech.

Drew and Sarah have moved their stuff, she wants him to join her and Mark for dinner and Drew doesn’t want to. Basically Drew is not happy about the move and thinks it completely sucks that she did this during his senior year.

Julia has made a schedule for visitation at the hospital when Kristina goes for her procedure and is telling Crosby about when he is walking Adam and Kristina’s dog, Otis, to be helpful and the mutt gets away from him.

Mark doesn’t have cable, which only makes it worse for Drew. At the Braverman’s, Kristina wants someone to be with Max for support and Haddie steps in.

Amber is at dinner with Ryan and she looks really nervous to the point that Ryan thinks she may have agreed to it just to make her grandfather happy. Amber explains that she is just distracted because of Kristina’s surgery the next day and apologizes to him for being so heavy on their first date together.

Kristina, Adam, Max and Haddie are waiting for dinner, Crosby brings it as promised, but he is late.

It’s the morning of Kristina’s surgery, Haddie is on the phone with her school, she was trying to get a break and get refunded to help the family and both Kristina and Adam doesn’t want her to.

Sarah shows up for work and Sarah arrives to tell him that the move went fine.

Drew is getting for school and Mark is still home, he tells Drew that he is taking the morning off to be home for the cable guy.

Kristina is at the hospital, time for her to go to the operating room and Adam is surprised that he can’t go with her. A tearful goodbye and Adam assures her that she is going to be fine. Kristina tells him to eat and he promises, then asks her what she wants when she wakes up, she tells him a cheeseburger. Adam is left by himself, Kristina is gone to the O.R.

Haddie is with Max at school, she tries to give him some pointers but he just wants to join the other candidates because he knows his speech and is ready.

At the hospital, Adam is still waiting, first with Julia, now with Sarah. Adam wants Sarah to tell him whats going on with her so he doesn’t think about Kristina and she tells him that Hank kissed her. Adam tells her to do what feels right, life is short. Crosby and Julia arrive for support.

At the school, it is time for Max to speak and he simply tells the kids that they should vote for him because he will put the vending machines back in the school. Max then goes on to tell everyone that he has Aspergers. The kids give Max a standing ovation and Haddie watches on proudly.

Krisitna is awake, the surgery went well but they need a few more days to get the results. Max won as class president, Kristina is both thrilled and shocked.

Sarah is home and apologizes to Drew for moving out and not speaking to him about it first.

Amber is playing something on her guitar when Ryan shows up with flowers and she tells him that she is confused about how he thinks about her. Ryan claims that he can’t stop thinking about her, Amber asks him why he said no to go into her apartment after their first date. Ryan wants to take it slow, he doesn’t want to screw anything up.

Crosby joins Jabbar for prayers and says one for Kristina and Adam.