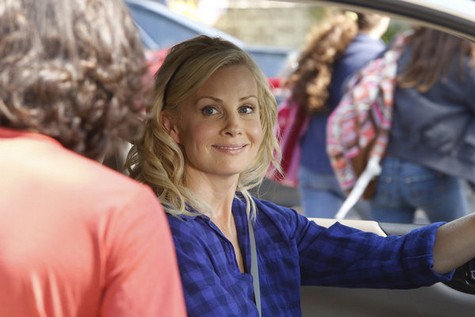 After a two week hiatus NBC’s popular drama PARENTHOOD returns tonight with a whole new episode. Tonight’s seventh episode of the 4th season is called “Together.” On tonight’s show Adam and Kristina ace challenges as she recovers fromsurgery and prepares for the next phase of her treatment; Amber and Ryan’s relationship develops causing concern or Sarah and Zeek. If you missed the last episode you can read our full and detailed recap here!

On last show Kristina was at a loss when she learned Max had to give his speech in his bid for class president on the same day as her surgery as Adam struggled to contain his nervous energy. Meanwhile, Drew was upset with Sarah’s decision to move them into Mark’s apartment, Joel was concerned for Julia’s health and well-being as she attempted to be “super mom,” and Ryan asked Amber out on a date.

On tonight’s show Adam (Peter Krause) and Kristina (Monica Potter) struggle to balance the pressures of daily life combined with her ongoing treatment. Camille (Bonnie Bedelia) and Crosby (Dax Shepard) take on additional responsibility to alleviate the couple’s burdens. Amber (Mae Whitman) and Ryan’s (Matt Lauria) relationship develops causing Sarah (Lauren Graham) and Zeek (Craig T. Nelson) to be concerned. Zeek knows too much about Ryan’s past and worries about his granddaughter. Meanwhile, Julia (Erika Christensen) continues to focus on Victor’s (Xolo Mariduena) happiness and how to better connect with her new son. Drew (Miles Heizer) tries to connect with Amy (Skyler Day) after their recent break up.

Tonight’s episode: Amber drops off Drew at his ex-girlfriend’s house, he wants to bring her some flowers that he is re-gifting and Amber thinks he shouldn’t do it.

Adam asks Max three times to take the dog out and when he won’t listen to him, Adam loses it because Otis pees on the floor. Adam has now burned the eggs, he really is trying to do everything on his own and Kristina wants to help out but Adam won’t have it.

Amber is on a date with Ryan, they are playing mini golf and when he tries to teach her some moves, they start getting intimate which carries off to her apartment, even though he wants to take it slow.

Ryan and Amber are in bed and someone is at the door, it is her mom – but it’s cool, her mom is thrilled that she is with a new guy.

Adam returns to work and is upset that the studio is a mess, he tells off Crosby and tells him it is unacceptable. Crosby also let Amber call in late because she slept in and that does little to impress Adam.

Julia is upset that Victor is not be included with the other kids at school so Joel suggests that he have a play date of his own and invite some children but he can only come up with one that he used to live beside in the apartment building.

Ryan is with Zeek who is trying to get him a job.

Kristina is frantically looking for the tea and is annoyed that Camille has moved it, then Kristina wants sugar and Camille tells her that she is not supposed to be having any.

Sarah visits Zeek and introduces her around to some of the vets. Sarah asks if Ryan is there and reveals to Zeek that they are dating, he doesn’t seem thrilled about it.

Kristina calls Adam and complains about Camille, she is feeling like a prisoner in her own home, she doesn’t like being taken care of and feels helpless.

Drew heads back to his ex-girlfriends house and is embarrassed when he finds her with a another guy and he is a senior in college.

Sarah heads over to Zeek’s house and asks if there is something about Ryan that he wants to tell her because she feels like he is holding back on something. Zeek explains that the kid just got back from Afghanistan and it is just going to take some time for him to get his balance back.

Kristina tries to call her mom, she wants her to visit and help out but she doesn’t have the time and Kristina is really upset about it. Camille wants to pick up Max, but Kristina insists on doing it, she just wants to be normal.

Kristina is thrilled to pick up Max at school, she is eating ice cream as well and he reminds her that these are things she is not supposed to be doing. Kristina asks him to keep her secret and the two head for some fun at an arcade.

Joel is home and Julia tells him that Victor had a blast with his friend, but she wishes that he would have as much fun with them.

Crosby finds Adam at the studio and offers to buy him a drink and get him out of there, Adam can’t say no because Crosby never pays. At the bar, a guy bumps into Adam who has very little patience and almost gets into a fight.

Ryan can’t sleep, Amber tries to console him but he prefers to be on his own.

Camille arrives at the house and gives Kristina a gift, it is a coverall that is passed on from her friend, seven women have worn it when they have gone for chemo. Camille tells Kristina that when Adam brought her home, she thought that she wasn’t good for him and she has never been more happy to be wrong. She then tells her that she loves her and will do anything for her, even though she is not her mom.

Drew is surprised, his ex-girlfriend shows up and tells him again that she really would like to be friends and is sorry about his aunt – all of sudden the two are holding hands and Drew kisses her

Ryan is popping pills for anxiety and Amber is trying to keep a brave face.

Kristina is at her first chemo appointment, with Adam holding her hand and he takes the coverall and wraps it around her.