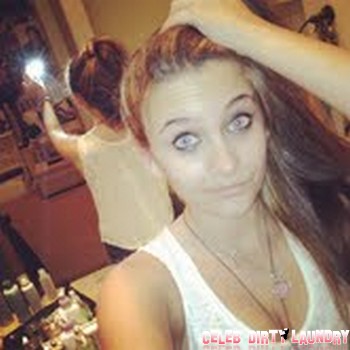 The 14-year-old daughter of the late Michael Jackson received a lot of twitter hate from fans of the British boy band One Direction. Paris Jackson, who was most recently in the press when her family fought for custody and her dad’s money, tweeted, “ay im voting for justin.. idc there’s no way MTV isn’t rigging it for 1D”  yesterday.

I don’t know what’s more surprising: that Paris prefers Justin, or that MTV would ever consider rigging an award show! Where has the honesty in television gone?

Since than, she has had nearly 12,000 retweets and thousands of replies—some in support of the Biebs, some less polite. My favorite retweet was by @directionerz112 who wrote, “@parisjackson you dumbfuck. We’ve been voting like Beliebers have. you Beliebwhores have to learn that Justin won’t win every award.”

I give it points for grammar and creative noun usage. Paris obviously ignited the hottest war since Jacob v. Edward.

Paris quickly tried to end the fight by tweeting, “OHMYGOD guys i like one direction jeez just because i didn’t vote for them doesn’t mean i hate them wtf tho.”

If anything could help the VMA viewing (besides sexy, barely legal male pop groups in tight pants), it’s this! Fans are sure to prove loyal by tuning in for their favorite artists.

Who do you think will win this war? One Direction has five members, so five times the fans right?* Is Justin’s new album going to win him every award? Who are you voting for?