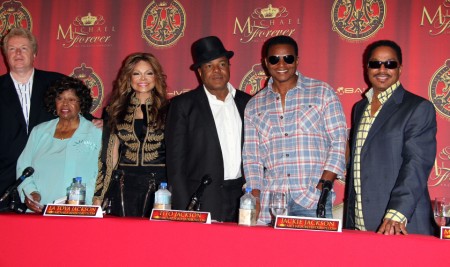 Police officers were called to the Jackson family compound in Calabasas today after family members reported a disturbance. L.A. County Sheriff’s Deputies took a battery report and TMZ reports the alleged battery has something to do with the recent events involving Michael Jackson’s mom, Katherine Jackson. No arrests were made.

Law enforcement sources told TMZ someone inside the Jackson home accused someone else present of a physical assault. TMZ also reveals:

Law enforcement sources tell TMZ … Lost Hills Sheriff’s deputies have been on the Jackson case since April, when a business associate of the Jackson family alleged that Katherine Jackson was being emotionally and financially mistreated by family members.

At the time, deputies interviewed Katherine who denied she was being mistreated, but we’re told the Sheriffs are still on the case and are interviewing other family members to determine if there is possible financial abuse.

The Jackson family has been all over the news the last couple of days after Trent Jackson filed a missing persons report for the Jackson matriarch on Sunday declaring she had been away and out of contact with her grandchildren for a week. Late last night, Jermaine Jackson released a statement declaring Katherine was in Arizona resting at her daughter Rebbie Jackon’s home.

Katherine’s health is said to be deteriorating as her children fight over Michael Jackson’s massive fortune. Randy, Jermaine, Tito, Rebbie and Janet Jackson are demanding the resignation of executors of the Michael Jackson Estate because they believe Michael’s will is a fake. A letter they wrote was leaked on the internet and it claims John Branca and John McClain had “taken advantage of the family … and have stressed out Katherine Jackson so much, that she recently suffered a ‘mini-stroke.'” Apparently they are trying desperately to get Katherine behind them. She has denied that she suffered a stroke.

What the hell is going on with these people?? Is either Branca or McClain the “business associate” the newest TMZ story is referring to? Not sure for now but the story is developing. Just give it time. The Jacksons will address the situation. If there’s anything they like more than Michael’s money, it’s publicity.