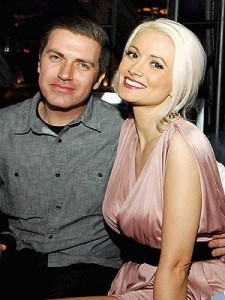 Pasquale Rotella, Holly Madison’s boyfriend or baby daddy, bed partner, boot knocker or whatever it is you want to call him not only got the model-turned-reality star pregnant but now he may be facing jail time!

In fact, Madison’s baby daddy is facing a big fat laundry list of criminal charges and he could very well be thrown into jail for a whopping 13 years if convicted of bribery, embezzlement, conspiracy and conflict of interest. Rotella is the founder of Insomniac, specializing in the production of electronic music concerts and he is one of six people being charged in a $2.5 million case surrounding backroom deals. These particular deals involved raves at the Memorial Coliseum in L.A. Rotella has said all along that he is innocent so we shall see if he is able to get off the hook. Well here’s hoping that he doesn’t get thrown in the slammer because he is going to be needed to get up in the middle of the night to fetch that breast milk, yo!

Madison confirmed her pregnancy to Usmagazine.com saying, “I’ve always wanted to be a mom. But I thought it would take longer!… I’ve been lucky! No morning sickness, but I do get a little nauseous. It happens before my (burlesque) show (in Las Vegas), so I keep ginger ale backstage.”

Madison said that she is about twelve weeks along in her pregnancy. Congratulations to her and here’s hoping that Pasquale Rotella doesn’t get thrown in the slammer for their family’s sake. I’m pretty sure if Pasquale got put away for years Holly would be begging Hef to let her and baby shack up in the mansion. I just don’t think that would be pleasant.

Anyone else think another reality show is in order?