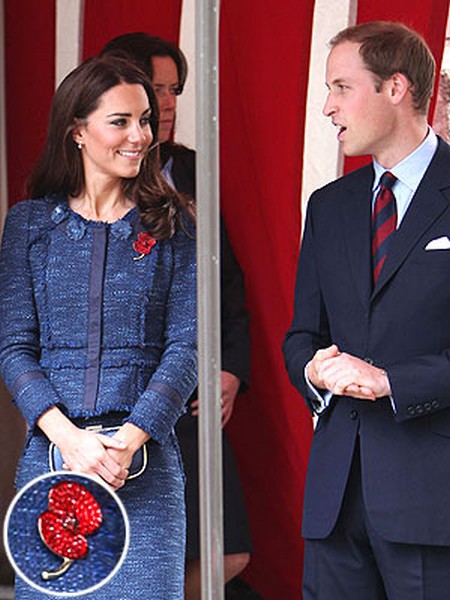 Kate Middleton wore a patriotic brooch as she stepped out with her husband, Prince William, on Thursday.  Despite Kate being placed 10th on People’s silly list of The World’s Most Beautiful Women, we know better!  The couple was on hand to mark the achievements of servicemen who recreated the Scott-Amundsen race to the South Pole.

Kate arrived at the event, which was held in London’s Goldsmith’s Hall, wearing a blue Rebecca Taylor dress adorned with a simple red brooch in the shape of a poppy.  The red flower is the symbol of the Royal British Legion charity.

The “poppy bling” is made of enamel and sell for a mere $40 each – leave it to Kate to look for a bargain.  Kate is not one of those people who need to always wear the most expensive outfit available in order to look great.

Today the Royal couple is expected to visit the Imperial War Museum Foundation for an event to raise money to build new World War I galleries at the museum.  It will be the third outing in as many days for Kate and William.  On Wednesday they attended the UK premiere of the film African Cats.

The duo seems to be making up for those six weeks spent apart earlier this year.  During that time Kate made her debut on solo official engagements while the Prince performed his military duty in the Falkland Islands.  Royal watchers are constantly waiting for news to break that Kate is expecting.  Who knows, maybe a baby is in the near future.

What about the baby rumors?  Do you think Kate and William will get pregnant this year?  Tell us what you think in the comments below!