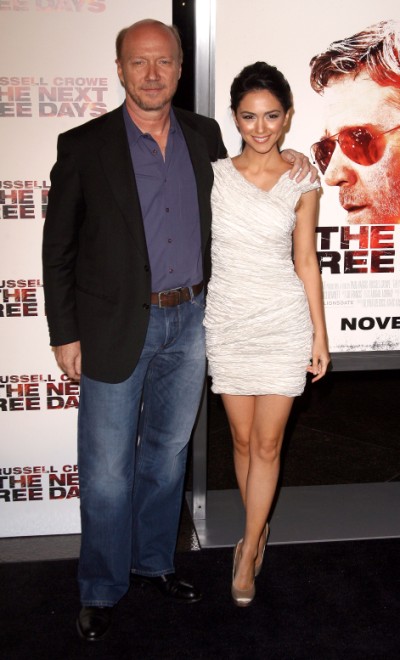 Director Paul Haggis is speaking out and confirming allegations that Scientology auditioned wives for Tom Cruise after his split from Nicole Kidman. The outspoken former Scientologist verified to Showbiz411 that Tom tried actress and fellow Scientologist, Nazanin Boniadi, on for size in 2004 but callously dumped her when he thought she talked down to him and was rude to best bud and Scientology chief, David Miscavige, when she asked him to repeat himself!

According to Contact Music, Haggis said, “I was deeply Disturbed by how the highest ranking members of a church could so easily justify using one of their members; how they so callously punished [Boniadi] and then so effectively silenced her when it was done. It wasn’t just the threats; they actually made her feel ashamed, when all she had been was human and trusting. I’ve met quite a number of people who have been treated shamefully but are afraid to speak out…Most of The Others are just ordinary people…They live in fear of retribution, legal, financial or personal…They fear an incredibly wealthy organisation that boasts that it seeks truth, empowers people, brings families together, encourages independent thought and free speech, and champions human rights. I would like to say that I don’t know how its members, many of them good and intelligent people, can remain so purposely blind when they are faced with evidence like this every day, but then I am no one to talk. I was happily blind for many years, so I know the shame that Naz feels.”

Naturally, Tom and his people have denied the auditioning stories but I’ve got to go with Haggis on this one. He doesn’t have lie! The only thing he gains by these comments is more Scientology hate. And he’s used to that. He wrote a scathing anti-Scientology piece for The New York Times in 2011. He’s got to be at the top of their suppresive sh-t list. Interesting enough, I found a photo of Paul Haggis and Nazanin posing on the red carpet for The Next Three Days in 2010. He wrote the screenplay for it and Nazanin had a small role. So they’re friends or acquaintances at least. He would know if she got screwed. You’ve got to wonder why Hollywood Scientology friends of Paul stay in the religion after all he’s had to say about it. Or are the Scientology actors told to stay away from him? He said himself he was happily blind for years so that’s how he justifies their behavior. It looks like he might be counseling people like Nazanin after they wake up and realize they’ve been brainwashed.

Does it kind of seem like guys like Miscavige and Cruise use the Scientology lists as a quasi harem? They scan through all the pics choosing the hottest chicks who might make good, Stepford matches. That’s so gross and such a negligent use of power. Did Scientology do the same thing for John Travolta? I think Kelly Preston was already a member when they got married. Rumor was he needed to clean up his gay sex tape-making image and fly straight for the public. Was Kelly’s picture in the book? This so reminds me of HBO’s Big Love when the pictures of the girls of marrying age at the compound find their way into the Joy Book for nasty old men to flip through and choose their next wives. So nasty. Is Tom Cruise just as bad as one of those fundamentalist wack jobs? Do you believe Tom auditions his wives?