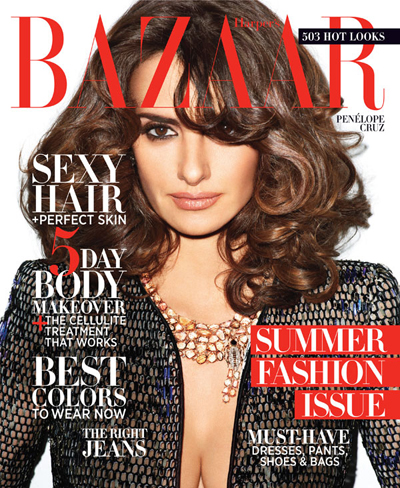 Penelope Cruz may be someone’s mother now, but she still manages to look glam on the new, May cover of Harper’s Bazaar.

In the interview, the 37-year-old actress discusses her favorite fashion designers (L’Wren Scott, Isabel Marant) her biggest vice (worrying too much), and her new bundle of joy, baby Leonardo.

Since giving birth in January 2011 to her first child with husband and Vicky Cristina Barcelona co-star Javier Bardem, Penelope has purposely lead a fairly low-key life.

“I won’t go to places where you’re going to find more attention. I go to the opposite,” she told the magazine. Reportedly, her perfect day is “running around with my family at the beach, that’s all.”

And while she, Javier, and Leo currently call Los Angeles home, it’s not ultimately where she wants them to end up:

“When I come here now, I have so many memories,” she said. “Some of them good, some of them not so good. I have lived beautiful moments here, but I don’t want to live here. It is not the place where I want to raise my kids.”

(We wonder if any of those bad memories involve exes Tom Cruise and Matthew McConaughey?)

Regardless, Penelope certainly seems to have her priorities straight: motherhood first and Hollywood second.

“Maybe I’ll make one movie a year, maybe two, but it’s not going to be more than that because I have other priorities now.” Related: Penelope Cruz Films Scenes For Her New Movie Alongside Emile Hirsch