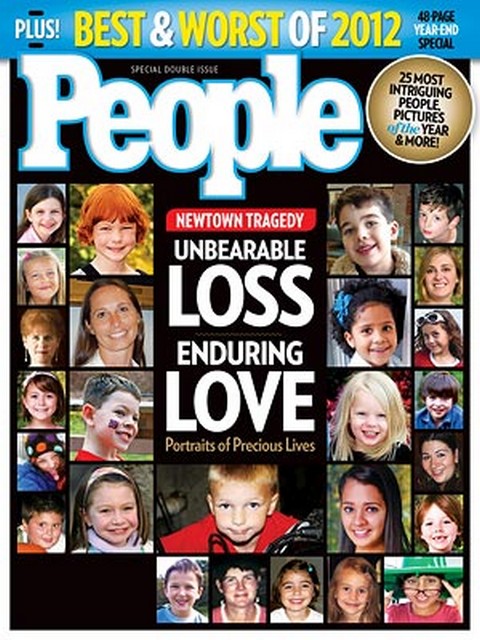 On this week’s cover of People magazine, we move away from the regular celebrity fiction and focus solely on the horrific school shooting at Sandy Hook Elementary. The cover of the magazine shows a collage of the young heroes who died when a gunman walked into their school last Friday and murdered 26 people – of whom the majority were elementary school students between the ages of five and ten. However, as with every tragedy, there are always stories of courage in the aftermath.

Jesse Lewis, 6, wrote “I love you” on his mother’s frosted windshield the morning before he died. Luckily, his mother, Scarlett Lewis, caught her son’s writing on film, “I said, ‘Oh, Jess, I have to take a picture of that.’ Thank God,” she exclusively told People magazine. Jesse was one of Victoria Soto’s learners. (You might remember Soto as the teacher who bravely hid her pupils in the closet and shielded them from Adam Lanza’s massacre.) Soto, who died a hero, managed to save several pupils, but regrettably, Jesse wasn’t one of them. He, in contrast, attempted to lunge at the shooter and stop the massacre, but he lost his life in a final heroic effort to save his friends and teachers. His parents, overcome with grief, told People magazine, “Jesse had no fear and thought he could conquer the world. He was a brave little boy who had no fear – and he always put everybody before himself.”

One of the other heroes, Principal Dawn Hochsprung, is also exclusively featured in People magazine’s latest issue. During the initial stages of the shooting, Hochsprung switched on the school’s P.A. system and managed to save hundreds of lives in the process. Hochsprung not only offered up her final moments for the safety and survival of her pupils and staff, but she also died as a symbol of courage and heroism in the face of evil.

May these young heroes and their legacies become a blueprint for humanity, and may their names forever be etched into our memories.  We dedicate these final words to the heroes and victims of this great tragedy, “Sometimes standing against evil is more important than defeating it. The greatest heroes stand because it is right to do so, not because they believe they will walk away with their lives. Such selfless courage is a victory in itself.” – N.D. Wilson, Dandelion Fire