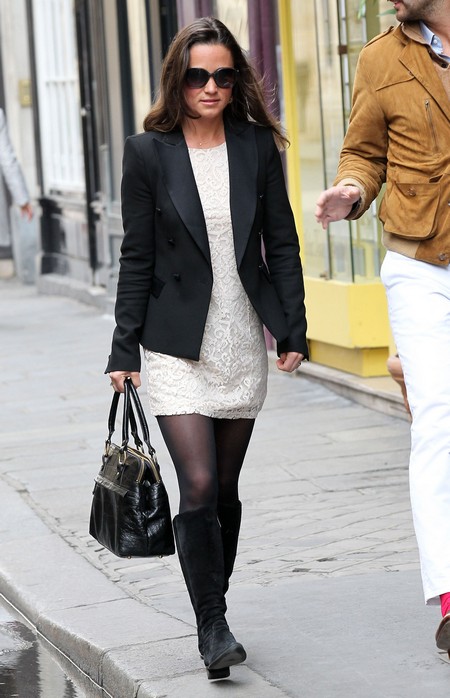 Kate Middleton’s family is concerned that Pippa Middleton is getting a ‘bad reputation’ due to her wild partying and participation in an illegal gun-slinging incident in Paris last weekend.  Well the in-laws of Prince William and his mom, Queen Elizabeth II, should know that Pippa’s reputation is not merely ‘getting bad,’ it is now very bad and getting worse!  A single incident might have been explained away with lots of expensive PR work – which the wealthy Middleton’s can afford.  But Pippa spent an entire weekend of drunkenness, debauchery and hooliganism with several men and this she will never live down.

There was of course the criminal gun wielding incident while driving through Paris.  Pippa was photographed happily joking with her several male escorts while her boyfriend for the weekend and driver of the car, Romain Rabillard, threatened a photographer with a pistol.  There was also Pippa’s kinky cavorting in the hours prior to the gun scandal at an over-the-top kinky bondage party complete with strippers and dwarves.  Pippa enjoying herself in a hot pink corset is not going to work for big sister Kate and the rest of the royals.

SEE: Kate Middleton And The Queen Are Disgusted With Pippa

Not the sort of public behavior that will win Pippa and the rest of her family friends at the palace. The entire weekend smacked of the type of degenerate and decadent excess from which the palace has tried so hard to shield itself.  Pippa’s behavior over the infamous weekend in Paris was like what might be expected of a Hollywood celeb like Rihanna or Katy Perry… maybe even like Lindsay Lohan is her ‘bad’ days.

The Daily Mail reported:  Pippa Middleton has been warned about getting a ‘bad reputation’ after her hectic partying in Paris.

Pippa, 27, rushed back to the Middleton home in Bucklebury, Berkshire, to seek advice from her mother Carole after being seen out with four different men in the French capital last weekend.

During one incident, her friend Romain Rabillard brandished what looked like a real gun at a photographer who was following them.

A family friend said: ‘Pippa has been told to be careful of hanging out with too many male admirers as she could quickly get a bad reputation. But her family have stood by her.’

So let’s be serious now – a woman that the royal family can respect or even associate with is not one who chooses to be squired about Paris with several men – drinking, partying, and breaking the law.  What do you think?  Let us know in the comments below.