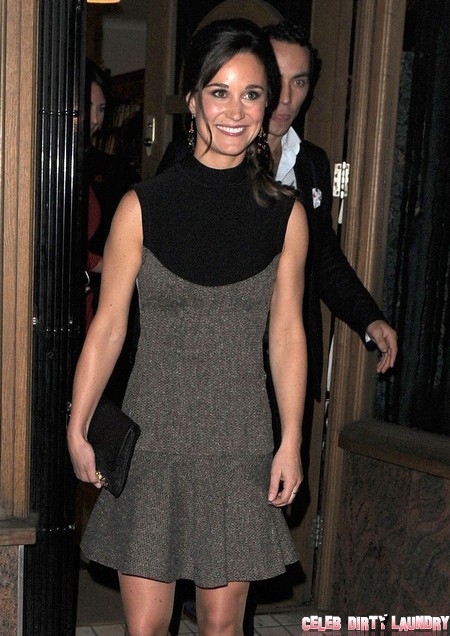 Pippa Middleton split from Alex Loudon last November and cried in a cup of tea. However, according to new reports, the 28-year-old party planner-turned-socialite is back in the dating game. She has been going on a string of dates with 37-year-old investment banker, James Matthews, and friends say the relationship is going from “strength to strength”.

The Middleton wild child was spotted at London’s famed Hakkasan restaurant with James, where the couple sat in a secluded booth in the upstairs area, and shared a bottle of the finest wine. A witness said, “They were deep in conversation and only had eyes for each other. Pippa was all smiled and kept giggling. They stayed for nearly three hours and didn’t seem to want the meal to end.” We’re ecstatic that Pips finally found someone who could compete with her spotlight lifestyle. Her sister Kate Middleton is, after all, the future Queen of England – a handsome feat for any man who is up to the challenge.

Pippa had been focusing on her new book, “Celebrate: A Year of British Festivities for Families and Friends”, but ever since this book was released to critical acclaim, Pippa has been sitting high and dry. A source told the Sunday Mirror newspaper, “Pippa is quite taken with James. She wants to take things slowly at first but she is ready for a full-time man in her life again.” Good for you Pips! Romancing the wealthy stone has never hurt anyone; just take a look at your sister! James Matthews is not only a wealthy investment banker with more money than God; he is also the brother of Spencer Matthews, who stars on the hit UK reality television show “Made in Chelsea”, a scripted reality television show that documents the lives of the wealthy and affluent Chelsea socialites. It sounds like a match made in Pound heaven!

What do you think? Do you think Pippa might finally find happiness? Let us know in the comments below.