Plastic Surgery Shockers: The Good, The Bad and The Really Ugly (Photos) 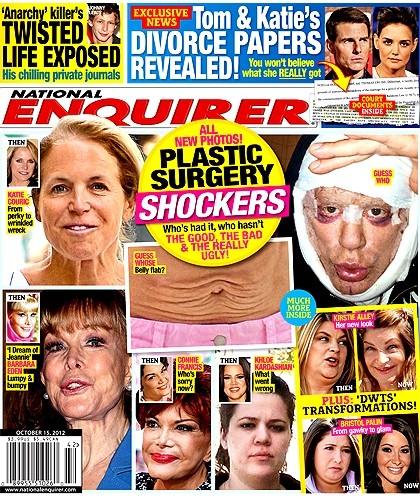 The gossip world was slow last week with Kate Middleton keeping covered and Kristen Stewart reuniting with Robert Pattinson so the National Enquirer decided to pull out the ever popular, tried and true plastic surgeries gone bad pictures.

Nothing is too surprising from the cover. We have the usual suspects like Mickey Rourke who’s the scary dude with his head wrapped and two black eyes. He’s had more face lifts than Sharon Osbourne so there’s nothing new from that photo. Then we have Connie Francis and the chick from I Dream of Jeannie. I’m not going to rag on older women who go under the knife. I’m not casting that first stone.

But then the Enquirer throws some curve balls with Bristol Palin and Khloe Kardashian’s plastic surgery pics. Does it look like they’ve had some work done? I’m not too convinced. The magazine is showing them without make-up on and a few pounds heavier. Dropping five to ten pounds can really help you look like a whole new person sometimes. And it’s well documented that Bristol lost a lot of weight before rejoining Dancing with the Stars though she has been battling plastic surgery rumors for awhile now. And Khloe looks totally different with make-up caked on her face. How horrible though! The headline next to Khloe’s bare face reads “What went wrong?” Poor thing! That’s mean but funny as hell.

But the best part is Kirstie Alley’s  pics. I actually do think Kirstie’s been to the doc to freshen up a few times. She’s got full on Joker face with her plumped up lips. I’m sensing eye lift too, right? But again, the “before” pic they used is her a lot heavier so it’s difficult to judge what’s really been tweaked. All we need to do is probably ask her. Kirstie’s a good sport about things like that. She recently said she only went on Dancing with the Stars to get down to a size 0 so I don’t think she’ll play coy with a few nips and tucks.

So all in all it’s an oldy but a goody. Will you check out the National Enquirer this week? I love a good plastic surgery story! Oh, and who do you think has the nasty stomach with the pink shorts? My guess is Tara Reid.