Playing Christian Grey Can You See Chris Hemsworth In Fifty Shades of Grey? 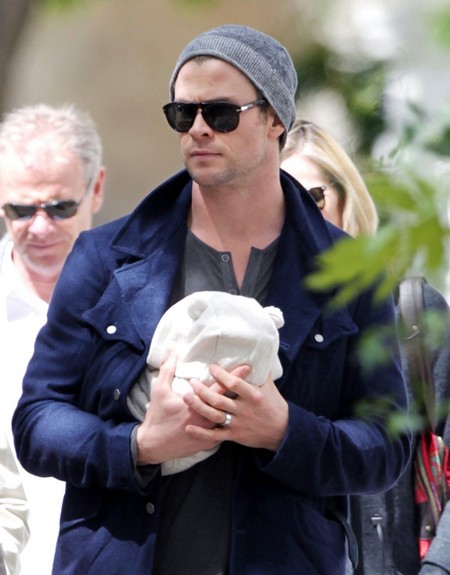 Can you see Chris Hemsworth in Fifty Shades of Grey? Will Chris play Christian Grey – he sure wouldn’t cut it as Ana. Fifty Shades of Grey is obviously THE book of summer and the rumor mill is ripe with notions of who could actually be cast in the big screen adaptation.  Throw brand spankin’ new dad (pun intended) Chris’ name into the ring.  And meanwhile, Vampire Diaries Nina Dobrev is fighting for the role of Ana.

Chris has plenty to say in an exclusive interview with Celebuzz:

“This {rumor} all started because we were in an interview [for The Avengers] and someone said to Chris Evans, ‘We heard you’re attached and you’re going to play (Grey),’ and he said, ‘Ah, no someone mentioned it to me.’… I was like, ‘What is it? I dunno, maybe I’m interested!’”

Hemsworth has since found out more about the barnstorming book that details the fictional tale of a literature student who gets into an S&M relationship with super rich businessman Grey.

“I’ve heard its some sexual, romantic, trashy — what is it?  I’m not going to say anything because I haven’t read the book. I keep kind of getting in trouble for even entering into a conversation about it!”

Christian Grey is a no-nonsense control freak that drips with power and control.  That’s what makes the character so appealing.  He’s the man that you never deny.  Have you read the trilogy?  Do you think that Chris Hemsworth can play control freak Grey?  Would he be well-cast?  Hit up the comments and tell us who you think should play Christian Grey!