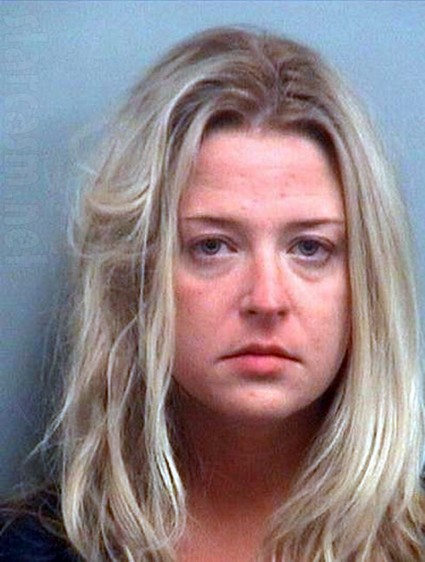 Kate Major is exposed as a crazy violent racist in the police report filed after her arrest this past weekend. Celebdirtylaundry covered Kate’s arrest for battery and resiting arrest with violence. At that point it was unclear weather Michael Lohan was involved in the incident but as you will read below we can now say that he was not.

Apart from the unlucky police officers called to the scene it seems Kate focused her violent rage on Rosario Tapia and Juan Jimenez – the innocent couple attacked by Kate. Mr. Jimenez said in the police report that Kate called him and his wife “several racial names” before she attacked his wife in the hands, breast and face.

According to the report obtained by TMZ: Cops were called to an apartment parking lot around 9:45 PM on Saturday night … after Michael Lohan’s ex-GF was observed beating the crap out of a man and his wife.

Cops say … when they arrived to the scene, Major was being restrained on the ground by several people who saw her attack Rosario Tapia and Juan Jimenez.  The officer who wrote the police report explained, ‘I attempted to speak with Major, who was screaming and yelling obscenities at Tapia, calling her a ‘fat f**k’ and a ‘b*tch’.”

Jimenez told police … he has NO IDEA why he and his wife were attacked … but explained he and Tapia pulled into the parking lot and noticed someone had parked in their assigned space. So they were waiting for another spot to open … when Major came bolting towards the car out of nowhere.

Jimenez claims Major opened the door and went crazy — calling him and his wife “several racial names” before Major attacked his wife in the hands, breast and face.  When cops tried to arrest Major, police say she resisted arrest and tried to kick the officers.

For more on the police report go TMZ.

Kate was released from custody some time after her arrest and booking – she is supposed to receive a psychiatric assessment before the courts decide how to proceed with the lunatic.