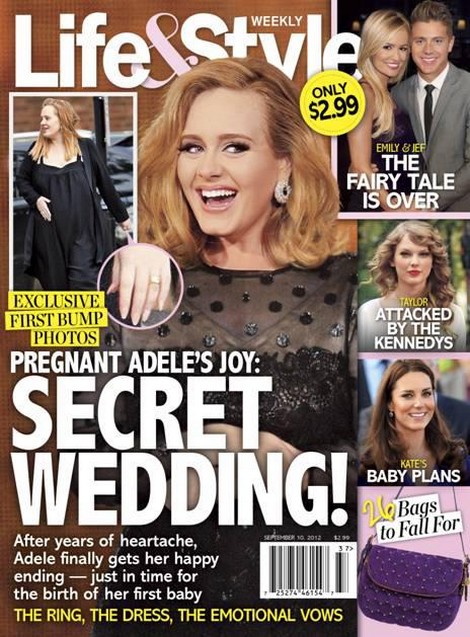 Grammy award winner, Adele is a few weeks from entering a new phase in her life, one that will focus heavily on family.  Her baby is due in early fall and according to the new issue of Life & Style Magazine, Adele might already have married the man she adores! The magazine has all the details on how Adele finally got her happy ending just in time for time for the birth of her first baby.  They have all the details of the secret wedding, the ring, the dress and the emotional vows.

The two were spotted enjoying dinner in London at Eight Over Eight on July 30th, a rare outing before the baby arrives,  “Adele was relaxed and calm, and she and Simon looked really great together,” an eyewitness tells Life & Style. “She seemed very, very happy. She absolutely does have a pregnancy glow.” But there may have been a second reason for the twinkle in Adele’s eye. The singer, who’s been dating entrepreneur Simon Konecki for the past year, was sporting a gold band on her ring finger.

“Adele and Simon managed to keep the baby news a secret for so long that there are rumors they’ve already gotten married, too,” reveals an insider. “She’s an old-fashioned girl and can’t wait to be part of a family unit. She just wants to focus on the baby and the man she loves.”

While Adele seems to be in an absolutely blissful state, the same cannot be said for the most recent Bachelorette. The happily ever after appears to be on shaky ground for Emily Maynard and Jef Holm.  After winning Emily’s heart just a few short months ago and all of the insistence from both of them that this is IT, the best relationship ever and that they are a family (together with Emily’s daughter Ricki), cheating rumors have picked up speed.  Even Jef’s brother jumped on board to confirm that his brother had found explicit texts from another man on Emily’s phone. Will this supposedly happy duo make it to the altar or will they end up like the majority of Bachelorette couples- in splitsville?

Also in the latest issue is an update on Taylor Swift’s summer romance with Conor Kennedy.  He appears to be smitten but the Kennedy women think that Taylor is just looking for an angle to worm her way into the family.  The young couple showed up without RSVPing at a family wedding and was asked to leave not once, but twice. It looks like Taylor is going to have an uphill battle if she wants to be accepted by this historic family!  Pick up the latest issue for more inside details on these stories!