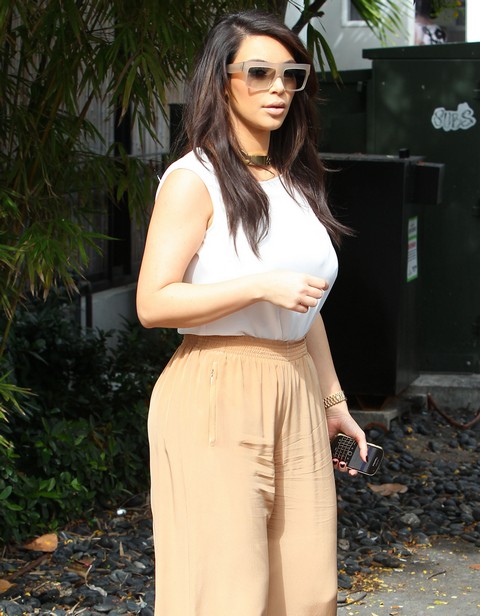 The apocalypse really might be near after all! I’m not talking zombies or the end of the world, actually what I mean might be even worse – Kim Kardashian was spotted having lunch with her family at Serafina in Miami looking a bit on the bloated side. I know the reality whore has obviously gained quite a bit of weight since taking on the full time position of being Kanye West’s “perfect bitch” but she’s beginning to look like that original bloat is turning into a full on baby bump!

While I’m not a fan of Kim’s sister Kourtney’s choice in men, I have to say when it comes to parenting, she most certainly makes the Kardashian family proud. I also think Khloe Kardashian will be a fabulous mother when she finally gets the opportunity- but Kim? Hell no.

Remember back to that very first season of Keeping Up With the Kardashian’s, you know back when we all kind of liked watching this family in action? Well, remember how Kimmie had that itty bitty dog that was sick and when she realized it wasn’t nearly as perfect as she is, she gave it away? Yeah. Oh and how about that adorable white puff ball of a kitten that she adopted and named Mercy?  Not only did we recently find out that she gave it away, but we’re supposed to believe that after Kim washed her hands of it, THEN its new owner realized it had a horrible stomach condition! Stomach issues are pretty obvious from the get go, don’t you think? Mercy has since died, but Kim lives on.

I know lots of people would love to see Kim have that baby and husband, you know a normal family life, but I still say that Kim’s mother skills will make her own Momager, Kris Jenner look like mother of the year.

Is Kim pregnant? What will she do when a baby spits up on her and she can’t give it back? Tell us your thoughts in the comments below!