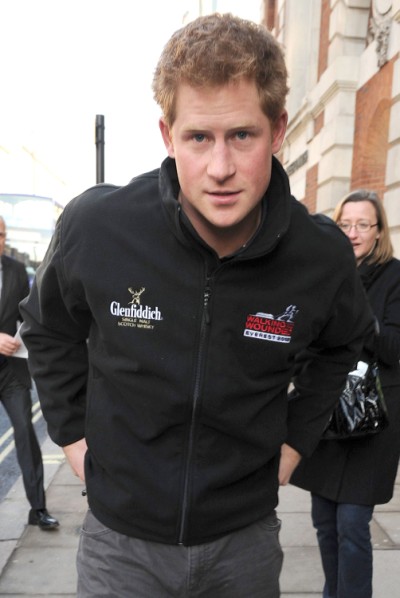 The Prince Harry scandal is sparking tons of debate on whether his security guards should have played wet nurse to the 27-year-old Apache pilot during his Las Vegas blow out. At the moment, they might have the most to lose (their jobs) whereas Prince Harry will most likely get a slap on the wrist and probably applauded by the world for his crotch cupping antics.

TMZ reports that royal sources (who have yet to issue a statement) are furious at Harry’s handlers! Apparently they “acted like a bunch of amateurs” when they let Harry make his own decisions!

When the girls entered the room, we’re told the ladies were NOT asked to surrender their phones … an epic failure considering Harry’s well-documented wild side.

As the party fired up, several girls began to snap pics on their cell-phones … and one of Harry’s minders lackadaisically told the women, “awww, come on .. no photos.”

Sources who were there tell TMZ … the minders were asleep at the wheel, enjoying the party more than protecting the Prince from himself.

After more boozing, the clothes came off … and more photos were taken, in plain view of the handlers, yet Harry’s people did nothing.

OK, I’m not saying the security guards should get off scott free but Prince Harry needs to understand that his actions have consequences. Why in hell would he expect chicks in Las Vegas who volunteer to come up to his hotel room in the middle of the night to act honorably? But that’s besides the point. We’re not discussing Harry’s decision making skills. Obviously they’re lacking. We’re talking about the royal family’s decision making skills. It’s a bad PR move to go after the help and that’s exactly the move their making right now. Countless stories are out today eviscerating these poor dudes whereas most royal sources are saying Harry will only look more endearing post scandal. Why? Because he’s cute? Because he has a sh-t eating grin? Because he actually looked sorry yesterday when his granny roped him back to England? Because he’s Diana’s son? It’s all true!

Just as Harry has been bred to shove off responsibility and accountability, the guards have been trained to take it from him. They’ll take the fall because it’s in their job description. I can’t get that amazing quote from Game of Thrones out of my head because it’s just so damned appropriate. The King sh-ts and the hand wipes!

The other losers are a disappointed Prince William and Kate Middleton. Since their wedding they have done everything in their power to convince the world that they are a changed monarchy. Kate recycles her designer clothes. William left the Olympics early to get back to his job. They fly discount airlines. But Harry’s irresponsible actions have set them back and the palace’s decision to just blame the handlers will set them back further because all that’s showing us is that nothing has really changed at all. Princes are not anything like us, because although Harry can party like a commoner, he doesn’t have to pick up the pieces the next day like one.

Do you think all the security guard stories today are stemming from the royal family’s PR machine? Is this a way for them to deflect attention away from Harry’s wrongdoing? Is it working for you or is he just coming off like a spoiled little royal brat who can’t control himself?