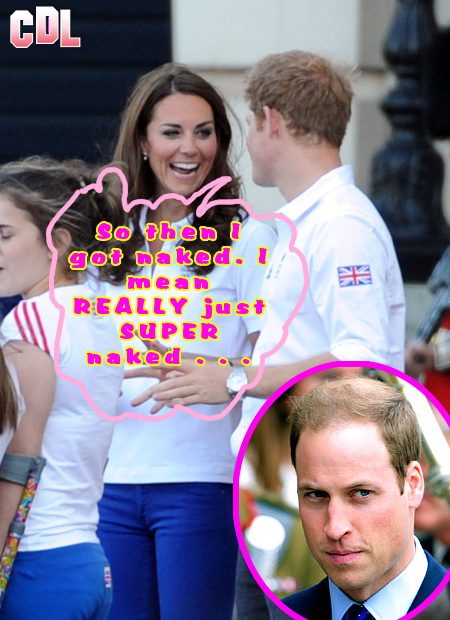 Prince Harry has made a lot of people angry with his wild, naked rompings, including his brother Prince William. It didn’t take long for the internet to blow up with news of the 27-year-old royal’s scandal and, unfortunately for him, the aftermath is going to be brutal. Well, I bet there’s one celeb in the world who’s praising Prince Harry’s naked photos, royal jewels, and ginger rear . . . and that’s Kristen Stewart. She’s just taking in a big, deep sigh of relief because the attention — at least a little bit anyway — has been taken off of her.

A royal insider told US Weekly magazine that “Prince William was told about the photos this morning” and that he is, quite simply, “not impressed.” I wonder if Prince William thought that he could’ve done a naked photo shoot better than his brother? Sort of sounds that way, doesn’t it. Ha. Just kidding. Prince Harry is definitely going to find himself in some hot water over the next couple of days, as he’s already being reprimanded by the army.

“He will be reprimanded [by the army]. Officers should never bring the Service into disrepute, whether on or off duty,” a senior military source told the magazine. “This display of social misbehavior has raised eyebrows. This type of behavior is not expected of someone his age and rank. They will call him in when he gets back and want to talk to him about it.”

Sounds like Prince Harry is in the doghouse big time. I wonder how long it will be before he makes it out — or if Pippa Middleton will ever let him live this one down? Well, at least the royal family got a good story out of the deal. Can you just imagine what people will say at family gatherings? “Remember that one time when Prince Harry brought shame upon us because he drunk-naked-bear-hugged some random lass from Las Vegas — and let his picture be taken?”

The royal family treats celebrity gossip like it’s the plague. They don’t touch it, and very rarely do they respond to it. Prince Harry had the royal balls to take naked pictures; the least Prince William could do is comment on them. Right? Are we being too demanding here?