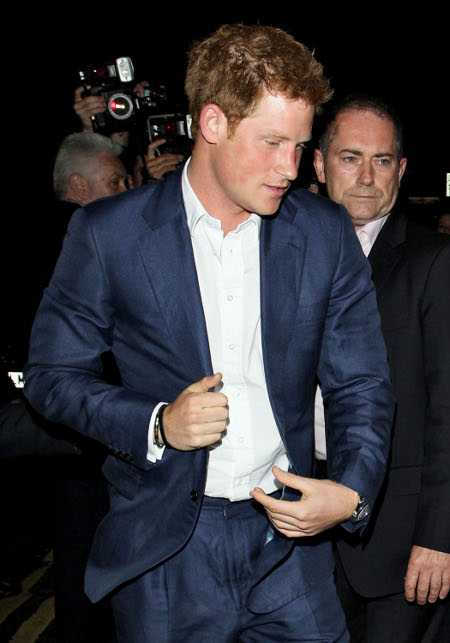 Prince Harry decided to bare everything, and we mean everything, in Vegas this weekend during a raging party that involved a game of intense strip billiards. Based off the photos, it looks like Harry lost everything — mainly his clothes and, probably, his royal title. The Queen is going to love this, isn’t she? Apparently, Harry and his crew got a VIP suite and, after scouring the bar for some worthy party mates, took the fun and games back up to the room where things got wild and super naked.

TMZ exclusively reports: “We’re told Harry, along with a large entourage, went down to the hotel bar and met a bunch of hot chicks … and invited them up to his VIP suite. Once in the room, things got WILD … with the group playing a game of strip pool that quickly escalated into full-on royal nudity.”

Some of Harry’s supposed friends snapped pictures of the royal shenanigans and, undoubtedly, sold them to the highest bidder. I guess Prince Harry really is this stupid . . . I mean if you’re a royal planning on doing scandalous things that could potentially bring loads of shame onto your royal family, at least make sure people check their cameras at the door. TMZ supposedly reached out to a rep for the royal family, who replied, “We have no comment to make on the photos at this time.”

Well, we’ definitely look forward to hearing what the Royal Family has to say about Prince Harry’s naked photos; wonder what Kate Middleton and Prince William are thinking? They will probably just brush it under the rug like they do with most scandal. They’re clever in that regard. To see the (censored) photos of naked Prince Harry click here.