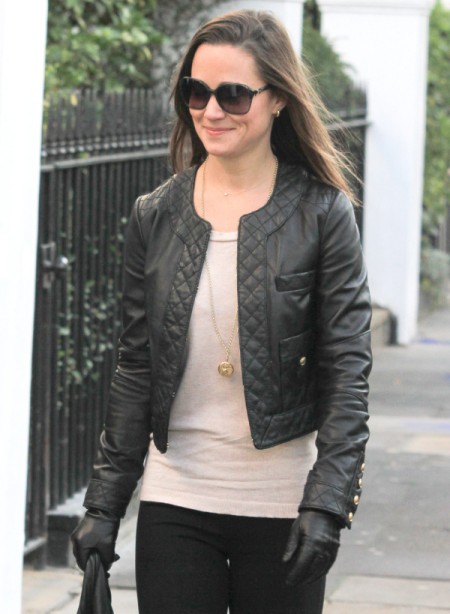 Somewhere Pippa Middleton is smiling right now. No, rather, she’s laughing her famous ass off because she just got knocked out of the running for the official black sheep of the royal family. Bless your fun-loving heart Prince Harry but your recent nekid escapade in Las Vegas just undid all you’ve worked so hard to overcome these last couple years. You almost had people fooled! You were perfect in Jamaica; exciting during the Olympics; hell, you were even regal during the closing ceremonies. But this latest hijinx shows the playboy prince isn’t ready to settle down and Kate Middleton’s family (mostly Pippa) is the last thing the royal couple needs to worry about.

Do you think Pippa will send him a thank you card? What about a fruit basket? How about a bag of bananas? Very tiny bananas? Because he’s earned it and you bet your ass Pippa’s laughing all the way to the farmer’s market. And to add a cherry to the top, Pippa managed to attend Ben Fogle’s book launch earlier this week without doing anything remotely scandalous. The Daily Mail dared to say she even looked appropriate! When it comes from the British press, those are kind words! She’s been doing her damnedest to put her Parisian gun scandal behind her, laying low and even hooking back up with her straight-edged boyfriend, Alex Loudon. But she couldn’t have prepared for this. Harry just gave her an unlimited get out of jail free card for life. Now, whenever she steps out of turn or those snooty Windsors snicker about her face or the fact that (God forbid) she works for her money she should say, “At least I didn’t get naked and dry hump a stripper in Las Vegas!” And if that won’t shut them up, I don’t know what will. Because however you look at this, and despite how quickly the royal family shrugs it under the rug, this is a major win for the Middletons.

Since Kate married into the Firm, her family has been raked over the coals by the British press for their social climbing and middle class origins but they have done very little to actually embarrass themselves. Sure, James Middleton likes raunchy cakes and dressing up in women’s clothes. Sure, Party Pieces tried to make money off the Olympics. Sure, Carole and Michael Middleton are in the process of buying a brilliant estate to match their new status. Good for them. But Pippa hasn’t come close to topping Harry’s harry nuts debacle. Everyone thought Pippa would be the new Fergie but it looks like Harry isn’t ready to give up the title of royal f-ck up just yet.

Pippa, on the other hand, hasn’t had years of royal training. She hasn’t been chased by fans and paparazzi her whole life. Discretion hasn’t been bred into her. She’s had to learn on the fly with no handlers and no bodyguards. She was not in control over her friend in Paris who brandished the gun. She was guilty by association. Harry is just plain guilty of stupidity.

Why do I compare them? Besides artistic license? I’m bringing this up because I’m tired of Pippa getting ripped on. She’s done stupid things but I chalk that up to inexperience. What’s Harry’s excuse? As a very wise (and royal) woman once said, “Money can’t buy you class” (courtesy Countess LuAnn De Lesseps). Can there be two f-ck ups in the royal family? Naturally. Just like the girls at Harry’s late night rendezvous, everyone gets a turn. But I don’t think it will be Pippa who joins Harry in a partnership of crime. Pippa is learning. Pippa has too much at stake – a career. Harry will get a slap on the cheek (both sets) and be ordered to lay low but that’s probably it. He’ll most likely get serious about his military career again. It worked for his PR machine before. But Pippa is smart. If I were her, I’d get papped today going to work or something else equally boring. The juxtaposition is important in reinforcing she’s turned a new leaf. She may be middle class but she’s working for her fortune, not just partying her trust fund away. Is it completely true? Of course not but that doesn’t matter. In today’s age, a picture is worth a thousand words and Harry’s pictures will be talking for a long time to come. The bar is so low for Pippa now! All she needs to do is keep quiet, stay calm, carry on and keep her clothes on. Easy enough?

Do you think Pippa is taking a huge sigh of relief now that Harry has snatched some of the heat off of her? Can Harry be redeemed or has this latest blunder sealed his fate as the black sheep of the Windsors?