Does Kate Middleton Hold Pippa Middleton To A Double Standard? 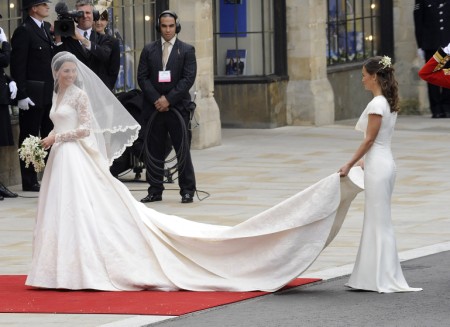 All right, you all know I’m a Pippa Middleton apologist. I feel for Pippa. I think she’s gotten the sh-t end of the scepter since Kate Middleton because Mrs. William Wales and the world’s golden girl. I know there are stories that she’s a social climber and trying to capitalize on her sister’s fame but I just don’t see it all the way out here in the middle of America so I don’t focus on that. What I will focus on is the fact that Kate’s brother, James Middleton, was just snapped with Hollywood D-lister and hot mess, Mischa Barton, and there’s no slap on the wrist. And it got me thinking. Do Kate Middleton and the royal family hold Princess Pippa to a higher standard?

Us magazine reports James was on hand to offer his support to Mischa Wednesday night when she opened her boutique in London. Did you know Mischa was born in London? I didn’t. Anyway, Jame supplied cupcakes for the event from his Cake Kit Company so I guess he was there to promote his business rather than shmooze. But it’s just… weird, right? Pippa can’t accompany her sister to a tennis match without naysayers crying she’s using her royal connections. Don’t get me wrong, the comment sections of many articles highlighting this event are filled with anti-Middleton family vitriol but it’s not half as bad as it would have been if Pippa was the one to show up at the party.

Is it because we don’t see too much of James? Is it because we hardly ever catch James with Kate? Or is it simply because James is a dude and people don’t usually point the social climbing finger at men? I think all of these could be true. And I’m genuinely interested in this because I grew up with brothers who never had to wash the dishes, clean the house or anything else! I hate double standards between boys and girls!

But I have to ask. What do we expect Pippa and James to do? They are young and working at expanding their businesses. James has his naughty cupcakes and Pippa her party-planning empire. They have to socialize and hobnob with the rich and famous (?) if they want to be known as anything other than Kate’s siblings.

However, it’s been reported that Kate wants Pippa to take the same princess etiquette lessons that she took before her wedding to make sure she knows how to behave while over in American promoting her book, Celebrate. Did James have to take the same classes? Why not? If he’s going to attend high profile events he should know which fork to use first as well. Or maybe he already knows that one. Is that something English people are taught early in life much like crisping up their accents around Americans to make us feel stupider? Ya, that’s right, I said stupider.

And is James’ love life the topic of conversation at Kensington Palace much like Pippa’s? Apparently, Kate and Prince William have taken quite the interest in Pippa’s boyfriends and are aching for her to find a man and settle down. It’s even been rumored, the royal family will help her find someone suitable if Alex Loudon doesn’t work out this time. Do they also have someone in mind for James? True, there’s the cross-dressing maybe gaybe issues with him, but still, why no matchmaking stories for James?

Now, do I know or think these rumors are true? Again, who cares? It’s the image the rumors perpetuate that’s the main point. For some reason Kate must keep her eyes on Pippa because she’s more of a risk. But why? Besides the gun incident in Paris (which I’ll admit was bad) what has she done wrong? Has she been pictured with stars? Has she given interviews? Has she divulged anything about the royal family? Cross our fingers to the gossip gods that someday she does, but for now, she’s been straight. So why is it that James can pose for the cameras and Pippa must shy away?

Do you think Pippa’s held to a double standard? Is it merely because she’s cute and in the spotlight more that people have more of an opinion on her life or have Pippa’s past actions really made her that much of a liability to the firm?