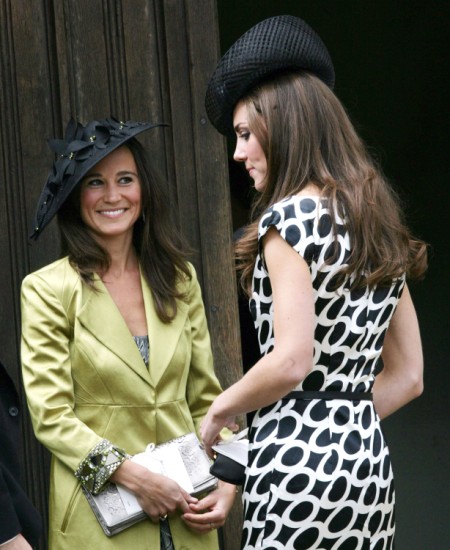 Kate Middleton has finally managed to forgive Pippa Middleton for her less than stellar first year as an in-law to the royal family. Pippa’s glamorous jet-set lifestyle and love of all things chic and exclusive was enough to cool her big sister’s attentions of late. But thanks to Prince William and Prince Harry, the two sisters are back in each other’s confidence and Pippa even enjoyed a front row seat at the Wimbledon finals two weeks ago when the Queen had to pull out. But the Duchess of Cambridge isn’t letting Pippa off the hook that easy. She’s come up with a list of conditions to keep Pippa on the straight and narrow and has told her if she wants to be a close friend of the firm, she’s going to have to behave from here on out.

“She’s back in the royal fold after reaching a pact with her sister,” a source tells Now magazine. “She’s acknowledged she put Kate in a difficult position and has agreed to abide by some rules.”

Now magazine cites three main laws that Kate’s laying down. First Princess Pippa has to relax on the partying. That shouldn’t be such a big deal since Pippa has kept a pretty low profile since the gun episode in Paris. Next, Kate wants Pippa to undergo coaching from Buckingham Palace on how to behave during her upcoming US tour for her party-planning book, Celebrate. Again, I don’t think that should be so difficult for the Pips. It’s not like she’s white trash or anything. Even at her worst, she’ll probably still behave much more properly than us.

But the last condition is the kicker. If things don’t work out with Pippa’s boyfriend, Alex Loudon, this time around, Kate wants her to agree to let the Palace advise her on future boyfriends. Say what, now? Yep, advise her on future boyfriends. The Pips might not sign off so easily on this one. It’s not like Pippa doesn’t yearn for her own castle but she’s always come across as having a mind very much of her own. I hope for her sake it works out with Alex. Can you imagine who the Palace would hook her up with. He certainly wouldn’t be hot and you know he’d be no fun. Pippa needs steady but she also needs some excitement. That’s why Alex seems so perfect.

I know Now magazine comes out with the most asinine stories sometimes but this one was just too fun to pass up. Let’s try to play along! What do you make of these conditions? Does Kate have a point behind them or do you think she’s taking her big sister role a little too far? I get she doesn’t want her sister to make an ass out of her anymore but I can’t imagine Pippa actually agreeing to all of this. Despite the pics of her grinding up on a dude in her bra and laughing as her friend points a gun at paparazzi, I actually think Pippa’s doing a pretty good job navigating her life all on her own. Am I wrong?