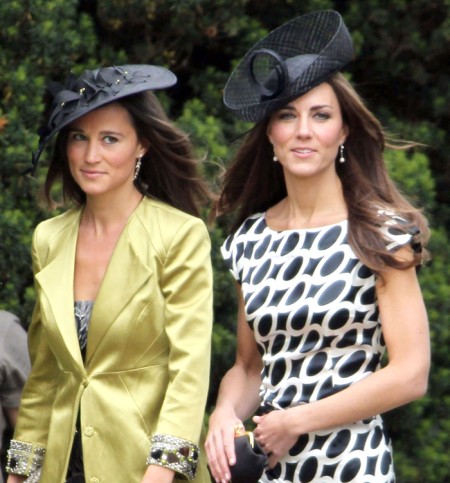 The Queen was supposed to join Kate Middleton in the royal box to root on British boy Andy Murray as he took on Roger Federer in the Wimbledon finals this morning but we were all in for a shock when Kate’s sister Pippa Middleton got out of the car to join her sister instead.

There was an article in the Daily Mail yesterday all about how people are worried that the Middletons are taking their rise in society too seriously and writer, Amanda Platell, cited the fact that Pippa and her parents have been constants in the royal box since the tournament started two weeks ago and that Carol Middleton now wears a regal signet ring on her left hand bearing the new family crest. What will Ms. Platell think of this new development? Not only is Pippa in the royal box again, but she’s taking the Queen’s place! Prince William and the Queen couldn’t make it because they actually work.

I have to say, I’m a little relieved the Queen’s a no show – and not because I want to see Pippa and Kate giggling the entire time, playing with their hair and searching for the cameras – although I am counting the minutes until they do. I’m no Murray fan. I want Roger to win his seventh Wimbledon so he can tie Pete Sampras’ record. I DO NOT want a British man to win Wimbledon this year. Before you sh-t all over me for that, let me explain. England is having a stellar year. It had the Queen’s Jubilee, the upcoming London Olympics, and if you believe some people, a royal baby announcement soon. Enough’s enough! You can’t have a British man winning Wimbledon too! That’s not fair. I will not stand for it! I’m a greedy, selfish, self absorbed America – get over it.

So to get back to my point. The last time a British woman won Wimbledon was in 1977 and the Queen was there to award the trophy. It just happened to be her Silver Jubilee year. When I heard that I thought Murray winning this year was fate. But the Queen isn’t showing! So I’m thinking the earth balanced itself out again. And perhaps, the Queen in her infinite selfless dignity thought with the whole kingdom watching Murray play, it would be best to give his nerves a rest and stay at home. Kate and Pippa don’t think that way – thank God. The Middleton sisters will be right up on him watching every stroke. Poor guy has got to be nervous! The match starts soon so I’m going to wrap this up. Who are you rooting for? Do you think Kate and Pippa are doing Murray more harm than good by being there? Do you thinks Kate’s baby bump will overshadow the game? Is anyone annoyed Pippa’s in the royal box again? Let me know!