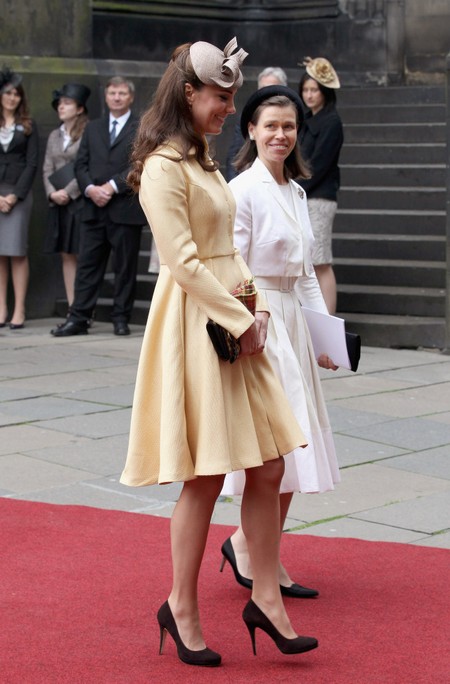 Kate Middleton looks and acts like she pregnant and masking a baby bump. We present photographic evidence, not that the Duchess of Cambridge is pregnant, but that her behavior and appearance would so indicate. Prince William must know the truth but he is not saying.

These pics were taken when Kate and Will, along with Queen Elizabeth II, were doing their royal duty at the Order of the Thistle ceremonies in Edinburgh on Thursday.  St Giles’ Cathedral was the venue for the event which saw Prince William honored as a Scottish Knight – Kate and Will are the Earl and Countess of Strathern.

To me Kate is looking a bit fuller in the face – that along with her seemingly self-conscious hand placement evident in the photos might just indicate that she is, finally, with child.  We know that producing an heir to the British throne is at the top of the list of the royal duties for the 30-year-old.  Kate and William have had ample opportunity to spend private time together since the prince returned from the Falklands – so why shouldn’t Kate be pregnant?

The Huffington Post fills us in with the fashion commentary on Kate at the event:

Style-wise, Catherine looked glowing in a custom Emilia Wickstead yellow coat-dress — her third choice from the designer, following that pink garden party dress that she repeated twice, and the green St. Patrick’s Day coat dress. Less thrilling? The brown pumps she trots out on the regs, and that tan curlicue fascinator she’s worn to several events since last year. (Seriously, Kate. Go shopping. We’ll watch the palace for you.)

If Kate is pregnant we will all know for certain very soon. But she really does seem to have that glow and ever so slight plumpness. What do you think?

Her Majesty The Queen accompanied by His Royal Highness The Duke of Edinburgh, The Princess Royal and the Countess of Strathearn attend a Thistle service at St Giles Cathedral for the installation of the Prince William, Earl of Strathearn, as a Knight Of The Thistle on July 5, 2012 in London, England.