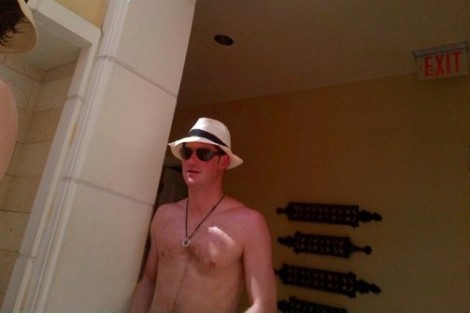 Well, what do you expect a playboy prince to do when he’s in Las Vegas? Prince Harry continued to not disappoint as his three-day bender in the City of Sin drew to a close last night. He capped off his festivities by jumping into the pool at the Wynn casino with all his clothes on and then, fueled with liquid courage, challenged gold medal Olympian, Ryan Lochte, to a swimming race. He lost the battle in Las Vegas. Unfortunately, he may lose the war at home as well.

So Tom Sykes at the Daily Beast is coming down hard on Harry for his less than royal behavior comparing this latest PR disaster with a similar one in Croatia last year where Harry also felt the need to dive into a pool fully clothed. Hey, sometimes, unzipping takes too damn long.

The bizarre thing is that although he appears incapable of stopping himself doing it, Harry appears to be equally aware of the need to stop behaving like, and allowing himself to be portrayed as, a 23-year old reality TV star who just got their name on the VIP list for the first time. Witness his recent comments to Canadian kayaker Michael Tayler, who asked him where the best place in London to party was: “I don’t go out any more,” Harry replied. “I’m too old.” In fact, 28 is pretty far from being too old to still be going out. But Harry is definitely too Royal to continue with these very public displays of what we had all hoped was just youthful idiocy, if he hopes to continue to have a place at the heart of the British establishment.

I totally get what Sykes is saying, and I agree that the Firm probably won’t be too stoked about the footage, but I have no problem with Prince Harry’s wild side coming out. If anything, it endears him to me a little more because it shows what a normal dude he is. He isn’t too snooty or full of himself to not hang with the party by the pool and make an ass out of himself. But where’s Kate Middleton when you need her? I can’t picture Harry oogling all those fake boobs under Kate’s watchful and heavily painted eye.

The Chicago Sun Times is more charitable to Harry. It’s not like he’s completely oblivious. It said while Harry doesn’t mind looking, he’s not been touching. Harry’s been keen to keep the ladies at a distance and was overheard telling his bodyguard he had to watch himself or he’d be, “up on Twitter or Facebook or YouTube thanks to somebody’s mobile phone camera.”

See, self-awareness is good! I’m sure he was only on his first beer when he made that lucid point.

Harry is indeed taking advantage of his advantages in life here. But is it really such a PR flop? Harry’s young. He’s single. He knows how to have fun. He also knows how to get the job done (see also: Olympics and Jamaica). Why can’t he let his hair down and flirt and drink and have a good time? As long as he doesn’t knock up a few of the waitresses along the way, I don’t see what the problem is. Besides, this is what we love about Harry. He was getting  a little boring. I can’t imagine Prince William phoning him up and telling him to calm it down. William probably loves this more than we do. While he’s watching DVDs with Kate and falling asleep on the couch by 9 p.m. each night, he can call up his brother the next morning and live vicariously through him. It’s the best of both worlds!

Now, if it turns out that Harry flew first class with no connections and is p-ssing away all the tax payers’ money in this little 72-hour soiree than I’d say the people have something to cry about. And, if Prince Philip’s health deteriorates even more then I’d grimace over the timing. But other than that, let the dude be a dude. He’s got the rest of his life to kiss babies, ignore his carefully chosen blue blood wife and pretend to be sober in public. What happens in Vegas, stays in Vegas may not be the case anymore but we can all look the other way and pretend for Harry’s sake! He’s got a world of hurt coming from Grandma when he gets home!

Check out the video from Extra below. It’s not of the race because  that’s not as fun. This is of him earlier in the day checking out a chick. It’s hilarious but it’s not that bad. He’s not pulling down bikini tops or molesting every little surgically enhanced thing walking by. He’s fun. He’s vivacious. He’s the party. He’s just Harry!

Do you think Prince Harry’s  image is tarnished with this new footage or is he still lovable as ever?