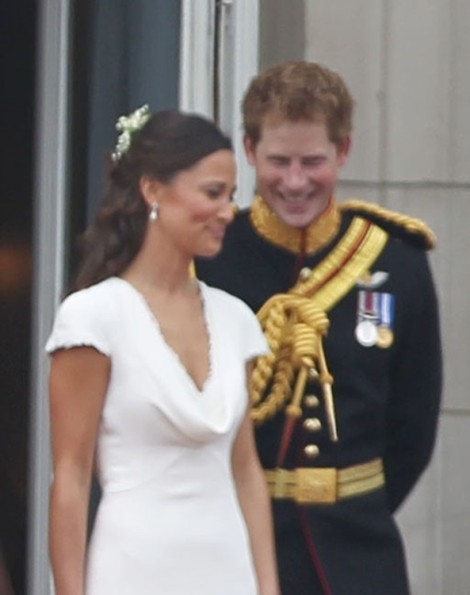 Poor Pippa Middleton. She just can’t seem to catch a break with her book, Celebrate. You have to assume she knew it wasn’t going to be easy to convince people her part-time job working for her parents readied her to be the next Martha Stewart, but the Daily Mail just eviscerated her in its review and even Prince Harry is laughing all the way from Afghanistan.

“He couldn’t resist reading chapters out loud. It’s raised morale and caused some much-needed cheer,” a source told The Sun. “Harry’s the subject of lots of banter. Everyone winds him up about Pippa. They take the mickey out of their friendship by calling her his ‘wifey in the making.’ Harry loves a good joke, even if it’s about him.”

You’ve got to appreciate a person who can make fun of himself. God, I love Harry. But even his friendly bashing can’t detract from the boatloads of critics having a field day with Princess Pippa’s first business endeavor not capitalizing on her royal connections. In a review entitled, “I’m not saying it’s basic, but it’s perfect for anyone who needs a recipe for making ice”, the Daily Mail wrote: “Others will be grateful for her well-bred, classy exhortations on what is chic and groovy, party-wise — though not all of it is innovative or radical. For example, Pippa advises hosts to dress up dishes at a Hallowe’en party with a trickle of tomato ketchup ‘blood’ and to put black plastic spiders on serving trays or in drinks. Now why hasn’t anyone ever thought of that before? Elsewhere, she explains the rules of a game of conkers and the correct way to toast marshmallows over a fire, a process that involves using ‘a long-handled fork’ and ‘flames’. Could it be more basic? Why not try roasting a turkey for Christmas or lighting small candles on a cake to celebrate a birthday? Hey, here’s another crazeee idea — what about making pancakes for Pancake Day?”

Would critics have been sweeter if Pippa had actually chosen to go against the palace’s wishes to promote the book? Who knows. I like to think so but Pippa’s in a shitty place of she’s damned if she does and damned if she doesn’t. If she promotes then she’s looked at as an enterprising social climber, if she stays quiet then she’s an uppity social climber. She can’t win. But she apparently hasn’t lost yet in her mind either because she’s planning on writing another book! She’s working on helping us all organize our weddings on a budget! Yes… this will be a much easier sell.

Is Pippa Middleton’s book getting a bad rap for no reason? If Prince Harry makes fun of it, does it mean it’s really that bad?