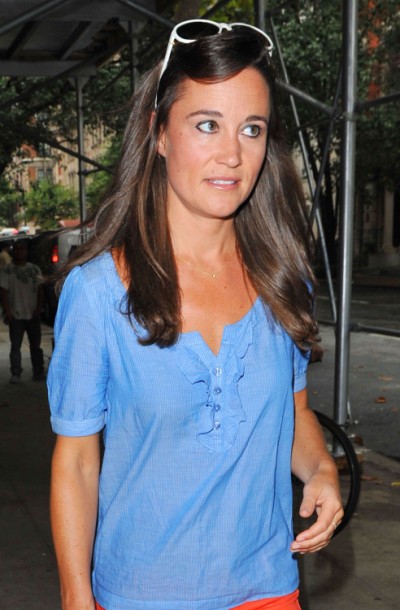 We all wondered how Pippa Middleton would promote her new book. Would she talk about Kate Middleton and Prince William? How would she handle the naked scandal and barely there weight questions? But it seems instead of quick thinking and witty evasions, Pippa is just not going to talk at all – literally. The royals banned Pippa from promoting her new party-planning book, Celebrate: A Year of Festivities for Families and Friends in the UK and the US and probably all the other countries on the planet. Apparently Kate and Wills (and all the others) are so worried about their negative exposure this past summer they aren’t willing to let Pippa go hog wild with a microphone. It’s bad for royal business. Unfortunately, it’s bad for Pippa’s business too but nobody seems to care about that.

Pippa was offered interviews with America’s cream of the crop including Oprah, Ellen DeGeneres and Anderson Cooper but she passed on all of them. She must think not promoting a book during the holiday season will only help sales and catapult her business out of her topless-loving sister’s shadows. The Daily Beast explains:

“Pippa has been besieged with offers from everyone in the U.S. media offering her a raft of opportunities,” a source tells Desborough, “Offers included being a special correspondent on shows like ‘Entertainment Tonight,’ as well as interviews with Ellen DeGeneres, Oprah Winfrey and Anderson Cooper … If she were seen using the royal family to promote her book, she would soon be viewed as the next generation’s Sarah Ferguson … If Pippa is quizzed about Kate’s topless pictures, then whatever answer she gives will generate more news about the matter, and upset Will and Kate.”

A plainly bereft spokesperson for publishers Viking says: “Pippa is not doing anything for us. She is not coming here to do interviews and is not available for anything, unfortunately.”

Publishing sources in the UK have told the Royalist that St James’s Palace – HQ for Kate – have been ‘a nightmare’ to deal with throughout the book deal, and now, it seems, with a ban on Pippa doing any press whatsoever, the final coup de grace has been delivered.

The failure of an author to get behind a book and help with its promotion all but guarantees that most media outlets will decline to feature the book prominently, especially given that it is being released in the busiest time of year for publishing when the shelves are packed with celebrities only to happy to dish in return for some airtime.

For a novelist, the impact may not be so severe as the book largely stands or falls on its own merits, but for a personality-driven book like this, failure of the personality to appear and promote the book at all is a disaster for the publishers.

The Beast also pointed out that most contracts between writers and publishers involve contractual promotional obligations and Pippa was probably no exception. If the book tanks, they might be able to go after her for money, which lucky for Pippa, isn’t that big of a deal since she wasn’t paid the kind of money her parents couldn’t bail her out from.

But why write the book in the first place if she knew the royal family was going to c-ck block her career on every turn? Would everything have turned out differently if Kate would have kept her clothes on? I’d be P-SSED! First Pippa’s a royal moocher and a social climber but then she tries to make something happen and the royal family slams the glass slipper down! What’s a girl to do? She’s the future King’s sister-in-law. Everything she ever does for the rest of her life is going to be looked at as taking advantage of her royal connections.

Now, let me contain myself. How can the royals really stop Princess Pippa from promoting her book if she wants to do it? There’s a line in the sand being drawn and essentially the royals are saying “You’re either with us or against us.” And Pippa wants in. She’s always wanted in. She’s taking a mighty big one for the team on this and she’ll get rewarded. Trust. Pippa is no Sarah Ferguson (who had a disastrous show on Oprah’s network FYI). She didn’t grow up watching  polo matches mixing with aristocracy. Pippa was always on the outside looking in. You don’t think the royal family knows that? They’ll let her hang around the castle a few times, enjoy her Wimbledon tickets and even ask her up to Balmoral this year for Christmas. What book? Pippa’s almost too easy. Putty in their hands.

Do you think it’s fair the royal family is banning Pippa Middleton’s book promotions? Should we really cry for Pippa? She’s a grown woman who can do whatever she wants. Did she just decide she’d rather be a member of the Firm rather than a celebrity? Can Pippa get any more boring?