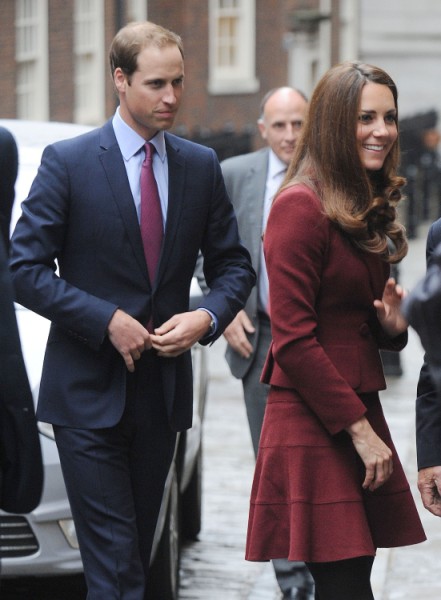 Sometimes timing just sucks. Prince William is making Kate Middleton go solo on the busiest day since she married into the Firm. Will has pulled out of the four engagements scheduled for Wednesday so he can attend the funeral of his former nanny, Olga Powell.

It’s understandable. Apparently Olga was like a grandma to William and Prince Harry but it means Kate has to deal with the massive crowds and attention in one of her first working days back since her boobs and vadge were flashed all over the tabloid. The Telegraph explains: “It will be her busiest and most high profile solo day’s work since becoming a member of the Royal family, and comes less than a month after she had to deal with the biggest crisis of her married life, the row over topless pictures of her printed in foreign magazines.”

You tell me. Would Kate have wanted it any other way? Sure she’ll be a little nervous on her own. She always is. But this is big time for her. This will be a chance for her to prove she’s worth every penny Prince Charles is spending on her and not just perky breasts and a fantastic ass. If these engagements were the first time the world was going to see her post-scandal I would get on Will’s case about allowing her to go alone but she’s already been out twice this week meeting with law scholarship recipients and the UK football team.

I’m a little surprised the royal family is allowing her to do a walkabout though. That’s where she walks the perimeter of the crowds to talk to people and shake hands or whatever. Will there be hecklers or does all that get fleshed out by security? Regardless, very smart Kate and Wills, very smart indeed. We will not be distracted! Kate will keep calm and carry on! She will do her duties regardless of the mud you sling at her!

I’m telling you. Kate 2.0 is in effect. Get ready for the Kate Middleton after topless scandal! Besides, it’s not like anyone wanted to see Prince William anyway!

Is this brave or foolish of Kate? Is she trying to send a message?