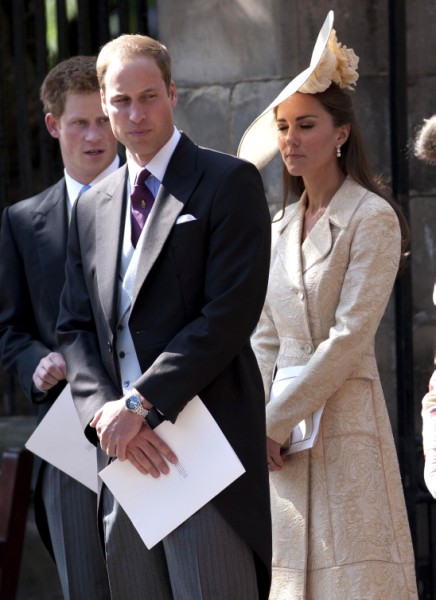 Like Pippa Middleton’s boobs, I always thought I’d see Prince Harry’s junk before Prince William’s but it’s looking like that might not be the case. The palace is furious (and incredibly nervous) about 270 new photos being shopped around of Kate Middleton and Prince William naked together while on the balcony during their vacation in Provence last month. Truly, that little vacay is the gift that keeps on giving because now there might just be video.

According to Tom Sykes at the Daily Beast, “Willard Foxton says, ‘Newspaper pictures editors tell me there are as many as 270 pictures being hawked around, which feature both the Duchess and Prince William naked – only 24 have appeared thus far. The Palace’s nightmare is that the pictures are stills from a video.'”

I’m totally not surprised! People have been hinting at it since Closer magazine first printed Kate Middleton’s boobs the first time around. Can you see the progression? First the boobs, then the vadge, then Prince William’s penis and the pièce de résistance – the royal couple naked together! It’s almost like they were breaking in our sensibilities! My inner 13-year-old is trying to contain herself. She’s waited a long time to see William’s peen.

Oh you Cambridges! You can be forgiven for a lot. Kate’s boobs out? She’s new to being royal and thought she was safe! Kate’s bare muff? A little bit of a dumb move but William blames himself for not covering her up! Naked William and Kate groping each other? SO STUPID! They will not get off so easy on this one. Sure they’re young and in love but they should have known better! Ah, Wills and Kate I love ya but stop acting a damn fool!

Get ready for some yelling and whining from Prince William’s people. We all wondered why he was freaking out so much over some booby shots, now we know William had a little secret he wasn’t willing to share. He was never worried about the boobs. He was worried about what was coming after! There’s still a criminal prosecution underway in France against photographer and publisher but who the hell cares? These photos and/or video are going to make it to the internet so we’re all going to see them. I might have been getting a little tired of Kate’s naked boney ass but I’m more than ready to take a peak at some naked Prince William!

Are you tired of this little scandal or kind of excited for the new round of pictures? As the snaps get more graphic and there’s actual video of naked Kate Middleton and Prince William do you feel less sympathetic towards the couple?