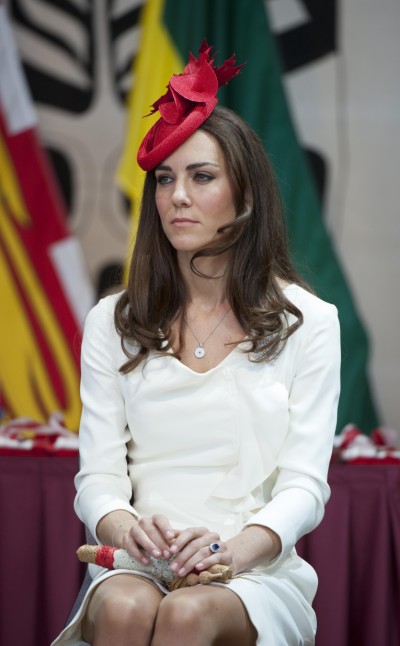 After the excitement of two weeks ago I thought Kate Middleton’s topless scandal was finally over but the Dutch had different ideas. Se Og Hor magazine published its second set of Kate Middleton nude photos because obviously it was so nice they had to do it twice. And this wasn’t just the same old photos everyone’s been reusing. Closer magazine struck first but Italy’s Chi magazine gave everyone a big old let down when they basically released the same boob shots. Se Og Hor upped the ante with the duchess in a new blue bathing suit… and a nice fuzzy pic of her bush.

How much more can this woman take? Or should we ask how much more Prince William can take? He’s the one that’s been super crotchity about the whole scandal threatening to throw people in jail and all. The couple have been MIA ever since returning from their tour. Kate even missed a good friend’s wedding and sent her mom and Pippa Middleton in her place. Apparently you need a lot of time to yourself after a week of scaling trees and snorkeling, but whatever, I get she might have been tired of dressing up and was probably a little embarrassed. Or did Kate and William know this spread was coming? Do you think they know of more photos? Only they know what happened on that balcony and the editor of Closer did say many more intimate pictures were taken. Do we have lots more to look forward to? Why do these editors keep pussy footing around? If you have pics of the royal couple getting it on on the balcony then just print them! At least yank the band-aid off for the two. Dripping these photos out week by week is probably good for business but it’s super annoying! And really, all we got that was new here was a vadge shot. And yes, I’m the degenerate who looked. So what, you did too!

But are you getting a seedy feeling? Like, this was kind of fun at first when it was just her boobs but now I almost feel like this is too far. I’m not saying I wouldn’t look if more intimate photos came out but I would judge myself a little harsher. But honestly, what the hell is Kate doing taking her bikini bottoms off outside? I get taking your top off for the tan lines but why the bottoms? I just feel bad because she has to keep reliving this stupid mistake. Even Prince Harry just had the one picture (we think). And unfortunately I don’t think it’s over. A lot of pictures are out there and we’ve only seen a small percent. What do you think is left to come out? Is this why Kate Middleton’s hiding?