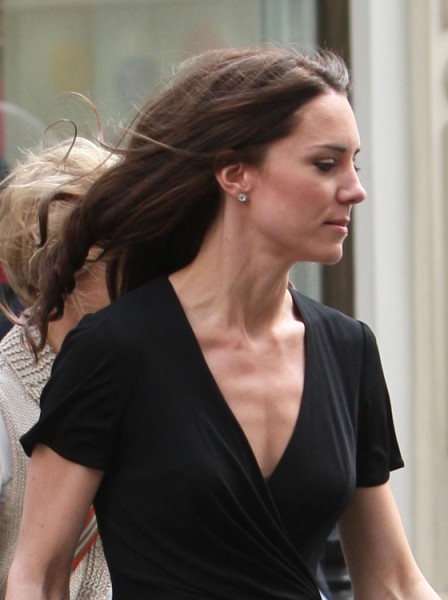 Apparently Kate just found out her best friend (and long-time bodyguard) Sergeant Emma Probert is pregnant, and while sources say the Duchess is gracious, she’s also a little jealous.

“Kate was so happy for Emma,” the source told Grazia magazine. “She told her she’d be the best mum and joked that she had ‘beaten her to it’! But I think Kate was upset that she will be losing one of her closest friends just when she is needing her the most. Obviously there’s meant to be a discreet distance between the Royals and their security. But they’re humans, not machines. Emma’s become a really close confidante to Kate and she gets on really well with her partner Colin [Childs, a member of the royal security team], too.”

First things first. Is Kate Middleton jealous? Probably a little bit. Her uterus is not her own anymore. If it were up to her I’m sure she would have started popping out little princes and princesses in her first year as a royal but the Queen told her to hold her horses. Kate knows her position in the firm is precarious without an heir so waiting must have been excruciating. We all know Kate’s a good waiter but she’s got to be at the end of her rope. And also, there’s nothing like trying to get pregnant that brings out the impatience in all of us. It’s supposed to be easy! Why didn’t it happen the first time? I’ve come to realize that only happens to dumb asses on 16 and Pregnant. So I’m sure Kate’s a tad on the green jelly bean side. With all the sh-t she’s been dealing with lately, it’s no surprise there’s no royal bun in the oven yet. Once she relaxes and all the vadge shots die down I’m sure it will happen for her sooner or later.

The most interesting thing about the Grazia story to me is the fact that her bodyguard is her best friend. Kate really has no friends. It’s like she gave up that privilege when she started following William around ten years ago. She wrapped herself up in his life and didn’t let go. This is why she needs to be nice to Pippa! Friends come and go but your sister sticks around FOREVER! And Pippa will stick around longer than that because she likes the perks!

Do you think there’s a little part of Kate that’s jealous of her friend’s pregnancy joy? You really can’t blame her for that, can you? Sure jealousy isn’t becoming of a princess but we can throw Kate a bone on this one.