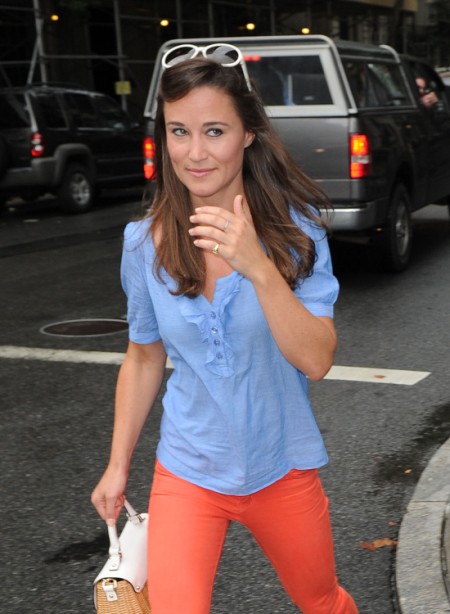 Pippa Middleton is back from her NYC trip and back to doing what she does best – embarrassing her sister, Kate Middleton. Apparently the Duchess of Cambridge was none to happy with her younger sister’s debut in America with all the tennis watching, flirting and fine dining. There can only be one member of the family who gets to do those things and Kate has decided it will be her!

According to Life & Style: “Pippa has been spotted clubbing and juggling up to four different men in four days. Kate is worried that Pippa’s partying will embarrass her as Harry embarrassed William, but Kate needn’t worry, as Harry set the freckled bar so high that Pippa is in no danger of topping it.”

Here here! Everyone needs to just lay off the Pips. She’s hustling and it’s working for her. If this is even remotely true I’m getting disappointed in my girl Kate. She made the choice to wait around for 10 years for that used ring. She cut out the fun and the partying and the chance of a career in lieu of being the next Queen of England. That was her choice and probably a good one. But Pippa has no prince; Pippa has no bodyguards and Pippa has no man. Let her have some fun. And how did this source get that Pippa’s been “juggling up to four different men”? She was seen talking to dudes. She was also seen talking to girls but no one wants to jump on out there and call her a lesbian for some reason.

Prince Harry and Pippa should not be held to the same standards. He’s royalty and has had years of training yet still manages to do dumb sh-t things. Pippa is not royalty and most of you out there are loathe to even consider her anything but common. If that’s the case then why can’t she do common things like date and party? As long as she doesn’t flash her crotch to the world, Kate should be cool with this. Now, if Pippa’s going to make a habit of living off and ultimately taking advantage of her royal connections then she should make an effort to fly straight and toe the line. I feel like she’s doing this pretty well.

Kate needs to keep drinking her water and chill out. Pippa’s doing just fine. It’s fun to watch one Middleton girl enjoy herself. Besides, do you really think Carole “I once was a stewardess but now have my own family crest” Middleton is going to let Pippa f-ck this up for the family? No way. Kate might seem like she’s in charge but Carole is the true Queen bee and she’s got that family locked up better than Kris Jenner.

Do you think Pippa owes it to her sister to behave beyond repute or do you think Kate’s letting her worries take over?