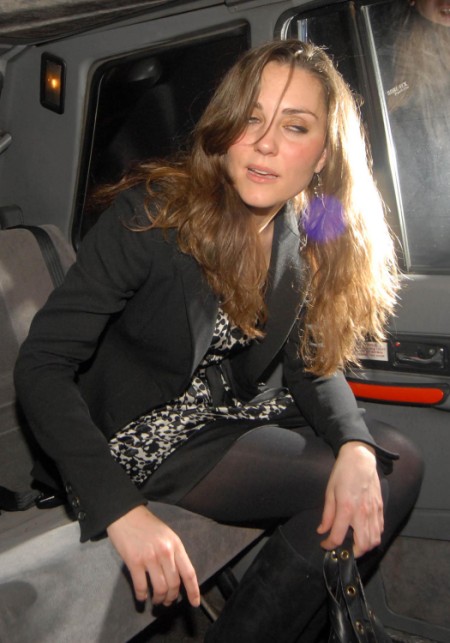 OK, so the world is abuzz YET AGAIN because Kate Middleton might be pregnant. I’m starting to hate that baby and I’m not even sure if it’s real! You got me, you know I love that baby with every breath in my body! But seriously! Kate abstained from drinking after an 14-hour plane ride and a boring-ass day of orchid-watching events? That doesn’t mean she’s pregnant. That means she’s tired as all hell and knows after a couple glasses of wine, Prince William would have to pick her up from under the table!

How do you like my pic above? THAT’S Kate Middleton after she’s been drinking. Sure it was taken in 2008 after she was caught leaving trendy nightclub Boujis but if you’re Prince William, you don’t want this rearing its ugly head at you after a long day shaking hands and trying to look interested. I wouldn’t be surprised if Kate’s ban on booze originated from William.  It’s widely known she can’t handle her liquor. She couldn’t handle it when she had 20 extra pounds on her so you know she hasn’t gotten any better with age!

Earlier this year a “friend” told OK! magazine that way back when “She [Kate] would like a glass of wine, but couldn’t really handle her drink. She’d get giggly and silly after a few glasses, so then would stop. She was never interested in getting really drunk. She would never ever let herself get out of control.”

Not we can’t be having that can we? We all know how important control is to the Duchess of Cambridge. She would NEVER let the evil temptress that is wine goad her into losing her cool especially while out on tour for the Queen. And God forbid a few sips relaxed her enough to grab an extra helping of bread. No, no, no, that would be unacceptable!

Do you think Kate wants anymore pics like this one getting out? Ya, right! If Kate has showed us anything it’s that good things actually do come to those who wait and that she never wants the blue blooded snobs to ever think she wasn’t good enough for the job. If Kate’s ever going to get caught taking a swig, she’ll do it in the comfort of her own home. Trust. And for my detailed-oriented followers – I know Kate was caught holding a glass of white wine during a pre-Olympics party in late July at Buckingham Palace but I didn’t catch any photos of her drinking it. Let me know if you did!

So I’m still not convinced on baby yet. I could be wrong but Lainey Gossip had a good point today. Didn’t Kate need to get vaccines to go to Singapore? The typhoid vaccine can’t be good for a fetus, can it? Just saying….

Do you think Kate’s worried about how she’ll act after downing a couple glasses of wine or do you believe that Duchess Kate is finally preggers?