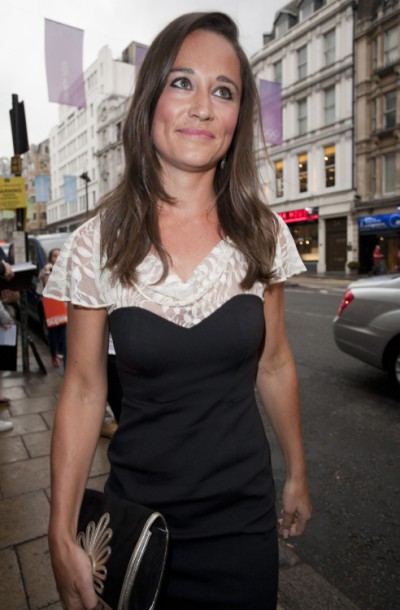 The royals have had a very busy summer with the Olympics and the Queen’s Diamond Jubilee celebrations but all of their good publicity has almost been overshadowed this past month with the arrival of Prince Harry and Kate Middleton’s buff scandals. You’d think with Fall inching in, things would slow down. Oh, you are so wrong! Pippa Middleton’s controversial party-planning book hits the shelves in three weeks and rounds of interviews have to follow and the royal family is busy prepping and crowding the girl many of them didn’t want in the fold to begin with.

Why is that little ‘ole party-planning book so controversial? Well, many didn’t want Pippa to write it to begin with. It blossomed so quickly after the royal wedding, it was as if Pippa couldn’t wait to cash in on her royal connections. Because let’s not forget, Pippa works for a living and has no aristocratic blood. But now, whether she likes it or not (she does), Pippa’s at the center of the Kate Middleton bottomless photos scandal. As if reporters weren’t already frothing at the mouth to ask Pippa about Kate during her publicity tour for Celebrate: A Year of Festivities for Families and Friends, they have a legitimate reason now. To the American public, Kate and Pippa are celebrities. They are not our royals and Kate is in the middle of a scandal with half the world having sneaked a peak at her vadge. That’s newsworthy. You have to ask the questions. If you’re a reporter and you don’t ask Pippa, “So how is your sister doing after this crazy summer?” you should be seriously reprimanded. The royal family has got to be freaking out.

Pippa is not groomed. She hasn’t taken princess classes. She does a pretty good job when she keeps her mouth shut but no one knows how she’ll be on the fly answering questions. Let’s assume her people will tell the reporters no Kate Middleton scandal questions. That’s a given but you know some enterprising journalists will pop a few in there and she’ll have to be prepared. Reporters are going to try because this kind of exposure can make or break a career. Pippa will be surrounded by smiling wolves. And there’s also the problem that Pippa’s accent will present. Kate and Pippa used to have the same accent before Kate got tweaked by the royal family to sound more blue blooded. I love listening to Pippa speak now because I imagine Kate wincing after every harsh syllable.

So how big is this moment for Pippa? It’s almost not fair. Not only is this her first true foray on the international stage representing her own accomplishments but she has to play damage control for the royal family. She is not technically a member yet she has the control to help a messed up situation. Or she could do a Paris rewind and embarrass them all over again. Pippa tends to get in trouble when she lets people drive her – both literally and figuratively. She has to stay strong about what she will and will not talk about. Kate will be off the menu unless she’s been instructed to do some positive spinning. She can’t be led to talk more than she’s supposed to. This is exciting stuff. I’m positive the royal family is working with her but Pippa’s a novice on her first publicity tour – anything can happen.

So can it get any better? The girl who stole the show a year ago; the girl who’s been labeled a social climber and hanger on, the girl everyone is quick to point out is not royal, is now the girl the royal family is counting on to perform. The whole world will watch to see if Pippa Middleton can keep her sh-t together. What does it mean if she succeeds? Christmas invites? More Wimbledon tickets? Let’s not jump the gun. The more important question is what does it mean if she fails? Will she be the royal scapegoat from here on out? Is Kate using Pippa in that capacity?