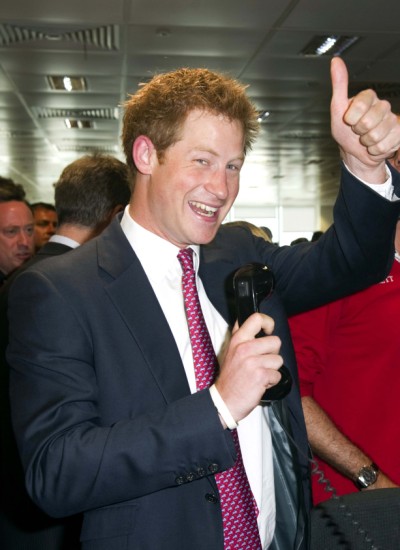 Prince Harry was pulled over by cops in London after taking a mystery blonde for a romantic bike ride and picnic.

What a royal sweetheart! The police officers didn’t ruin his game though because they were forced to apologize for pulling the prince and his date over for doing nothing wrong. That’s got to be a first for Harry. Did they just want a closer look at his Ducati 848? I’m not sure if that’s considered a hard-core cool bike, but with Harry on it, it looks hot as hell.

The Sun reports Harry was hesitant to reveal himself to police after they asked him to show his face. “It must have been embarrassing for Harry — he was keen to impress, having decided to surprise her with a picnic,” a source said. “The officer said, ‘Can you take your helmet off?’ and Harry replied, ‘I would rather not’. His minders stepped in and the officer said, ‘I’m so sorry’.”

Why did he have minders there? Are they with him on all his booty calls, I mean dates? And what was the reason for the stop? Do London cops usually go around stopping people for no reason? This little brush with the law took place a few months ago, the newspaper reports. Why is it just coming out now?

Oh, who cares about all that? We just want to know who the mystery blonde was, right? I’m guessing it was British pop star Mollie King or it might have been that lingerie model, Florence Brudenell-Bruce. Whoever it was, it wasn’t Chelsy Davy and that’s who I always hope for. Chelsy wouldn’t have been a big “mystery” and I can’t see her riding on the back of his Ducati. Chelsy seems like she’d have her own.

In other Harry news, The Daily Beast is speculating that all of Harry’s puking and partying lately has to do with an imminent deployment date. It’s being downplayed by the palace, but Harry’s press spokesman did say, “Prince Harry is currently in the midst of pre-deployment training with an aspiration to deploy either later this year or next year. The decision is entirely the Army’s chain of command, and no final decision has yet been taken.”

Well, you know they’re not going to tell us anything. It’s vital Harry’s whereabouts be secret so he doesn’t put his fellow soldiers in undue harm. Harry’s been chomping at the bit to get back to the frontlines ever since the media blew his cover in Afghanistan in 2008.

They won’t let him go before the Olympics, will they? I need to watch his face as he sits front row at the women’s beach volleyball events. Please Lord, give me that small miracle. Then Harry can fight for his country!