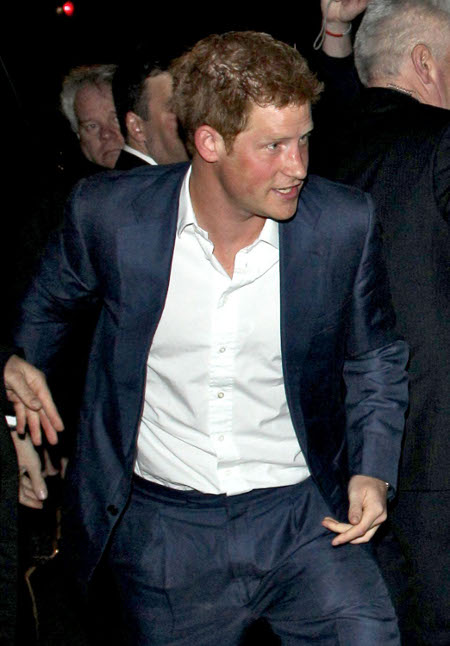 Prince Harry has always been labeled as the “party boy.” He has been spotted at more drunken parties than a secret alcoholic and it seems Harry’s recent attempt to become clean is all washed away in the chlorine filled pool of doubt. Harry met up with Olympic champion Ryan Lochte during a booz-fest post-birthday celebration in Las Vegas. Harry jumped into the water around 3 AM and was still wearing his jeans. There’s no news on whether he woke up the next morning from a chafed bum.

Bikini clad beauties, straight out of a Tila Tequila video shoot, were cuddling up to Lochte and Harry when Lochte counted on his fingers to three and had a quick race with the Windsor. Obviously, without a shadow of a doubt, Lochte won the impromptu race. An audience of 5,000 cheered the two along as they drunkenly hugged one another after the breast stroke race. For pictures of Harry’s pool party with Lochte click here.

Harry has been the go-to-guy for post Olympic moments, as the red-haired drunk face had a similar event with Olympic runner Usain Bolt, when Harry sprinted down the track at the University of the West Indies last March. Usain jogged after him and laughed. We would too if we were trying to show Usain Bolt how cool we are. Dude, seriously, he is the fastest man on the planet.

There’s no news on whether Lochte’s tight white speedo was sold to anonymous bidder smelling of fear on Ebay, but we know that someone bought Harry another drink not too long after his dip in the pool.

Let us know in the comments below if you think a leopard will change its spots? If you need to get caught up with the Prince Harry naked photo scandal click here.