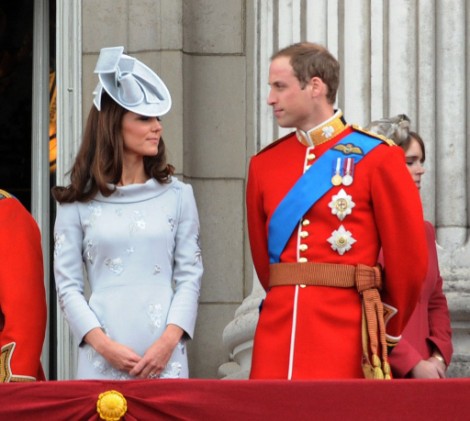 So the word on the street was that Prince William was going to quit his work as a search and rescue pilot for the RAF later this year so he could move his budding family to Kensington and begin life as a senior royal. Queen Elizabeth and Prince Philip are getting older and can’t travel as much and people apparently don’t want to see Prince Charles or Camilla Parker-Bowles’ unpopular mugs. I thought it was a done deal. But not so fast! The Telegraph reported today that while William is probably quitting RAF and moving to London, he’s still considering returning to the Household Calvary. He was a troop commander in the armored reconnaissance unit in 2006 but I have no idea what that means. It kinda sounds a little bogus. But it’s all about appearances people!

“William knows that, once he becomes a full-time working royal, there is no turning back,” a source said. “That is why a switch to another of the Armed Forces is seriously being considered. It will allow him the life he loves while freeing him for more royal duties – a sort of happy compromise.”

JUST BE A ROYAL! What’s so wrong with waving your palm, cutting ribbons and kissing babies? Does William hate the prospect of being a working royal so much or is his decision more calculated than we think? It’s like I’ve said – William is smart and much better at the PR game than Prince Charles. Charles has effectively waited around for the past 60 years claiming the dubious honor of being the longest running Prince of Wales in history. He’s gotten shit on for being out of touch and, more recently, impatient for his mum to die and give up her job. If William’s not careful he could be in the same boat. There’s no reason to believe he will be king anytime soon. It could be thirty years. Those Windsors seem to have longevity on their side. So William’s thinking ahead. If he and Kate become working royals and have nothing else then they might get the backlash that Charles and Camilla are currently experiencing. I’m not sure if William knows what real work is or if this Household Calvary bit is even a real job but if people think he’s working as well as senior royaling then he’ll be considered some type of national hero. He’s so committed! He’s got two jobs! That along with Kate Middleton’s pregnancy will be another gold star for the Cambridges. These kids are good.

What do you think of Prince William’s decision? Does he truly want to work or is he just thinking of his image? Is that so bad?