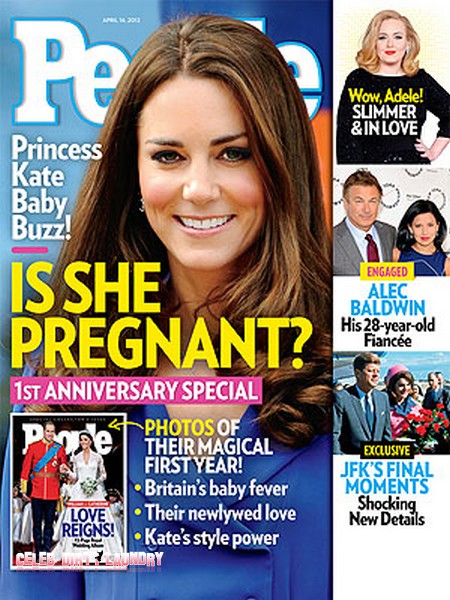 The current issue of People Magazine features the cover story ‘Princess Kate Baby Buzz – Is She Pregnant.’  Prince William and Kate Middleton will be celebrating the first anniversary of their wedding this month and People has a 1st anniversary special edition.  They have all the photos from their magical first year together.  They also have all the details on Britain’s baby fever – the media in both Britain and the rest of the world have been speculating that Kate was pregnant from the moment she married Prince William.

People has more: “Yes, say royal insiders, Prince William and the Kate have babies on the brain.   From their decision to quietly “shelf” a hoped-for trip to Africa to the Palace’s recent sensitivity to speculation on the subject, veteran royal watchers say the couple is poised to start a family sooner rather than later.   In particular, watching their friends become parents “does help” boost William and Kate’s decision to follow suit.”

Kate Middleton is such a naturally loving person that motherhood is obviously in her very near future.  We would not be surprised if Duchess Kate and her Prince will be adding a member to their family late this year or early in 2013.  We wish all the best to Kate and William – they are an inspiration to us all.   Do you think Kate will make a great mom?  Let us know in the comments below.

Also in this week’s magazine they have the details on Alec Baldwin’s engagement to 28 year old fitness instructor Hilaria Thomas.  What can they say – there’s no fool like an old fool?  Can you just see this relationship working?  Alex is 54 and Hilaria is 28.  Meanwhile Alex had a twitter meldown because a reporter went to Hilaria’s yoga class to snap a picture of her engagement ring. He tweeted: “Shame on the no-talent trash from the Daily News for invading the privacy of 75 people in a yoga class to take a picture of someone,” Baldwin tweeted. He also posted, “If you’re looking for an experienced crime reporter to crash a yoga class, contact @SimoneWei,”

To find out all these details and more, pick up the current issue of People Magazine on stands Friday.