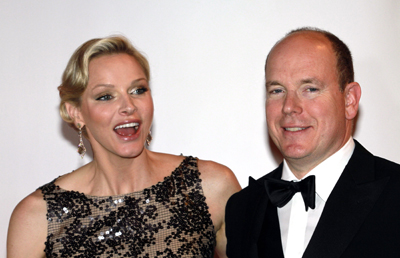 Poor Princess Charlene! She’s been the wife of Monaco’s Prince Albert for over a year now, but it doesn’t seem as if she has completely adjusted yet.

The 34-year-old Olympic swimmer, formerly known as Charlene Wittstock, and her royal husband recently sat down with CBS News for a rare, joint television interview, and Charlene could barely manage to utter anything other than “great!”

When asked how she was enjoying married life, the South African native took a lengthy pause before chirping “Great!…I highly recommend it,” she said with a long jittery laugh. Related: Princess Charlene Is Depressed At Not Being Able To Get Pregnant

When interviewer followed up with a question about how life as a princess was, Charlene again uttered “great,” before admitting that she didn’t know how to answer that question and turning to her husband for help, as if Prince Albert would provide her with an answer.

Instead Prince Albert gave the universal “time out” sign, calling the interview to a halt.

From the body language in this interview, it seems that the couple’s relationship is still on shaky ground.