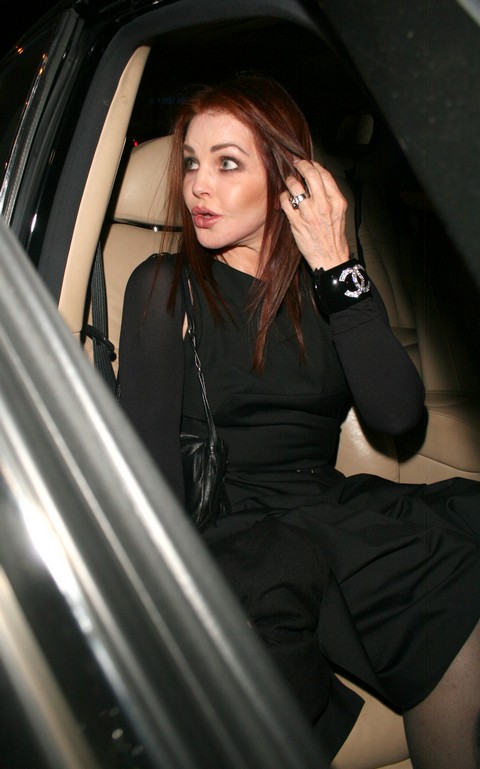 Priscilla Presley may be eating her own words as the fight about her granddaughter Riley Keough continues. Riley’s mom, Lisa Marie Presley, and Priscilla have been at each other’s throats ever since Riley started partying and smoking. Priscilla wants Lisa Marie to force the 23-year-old part-time actress to get her life together, and is criticizing her laissez-faire parenting style. Riley, who played a stripper in the hit film Magic Mike, and a lesbian in Jack & Diane, dumped her fiancé this summer to return to her highschool boyfriend Ryan Cabrera, who is seven years her senior.

National Enquirer reports that the fight turned bitter after Lisa Marie yelled to her mother, “Butt out of my life! She’s my kid and I’ll raise her the way I see fit! You didn’t do such a bang-up job yourself—so just stay out of it!” So basically Lisa Marie is blaming her crappy parenting style on her mom’s crappy parenting style! If Priscilla had raised Lisa Marie better, she would have been a better mother! Now, Riley is a 23-year-old woman. Short of a financial cut off, what does Priscilla expect her to do? A family source explained, “Lisa’s way too lenient with her, and Priscilla is fighting to rein Riley in before she ends up in rehab, pregnant, or worse—as another Hollywood casualty.”

So how does all-grown-up Riley feel about this crazy family drama? “Riley is threatening to stop communicating with both of them . . . There’s a lot of yelling, door slamming, and plenty of tears.” We think Riley is an adult and can make her own mistakes—no matter how crazy they may be! It always sucks to be surrounded by a warring family, especially when you’re an adult! It would be one thing if she were a teenager, but I say Priscilla and Lisa cut her off and let her do her own thing! What do you think of the Presley war? Is Priscilla right to be concerned, or does she need to mind her own business?