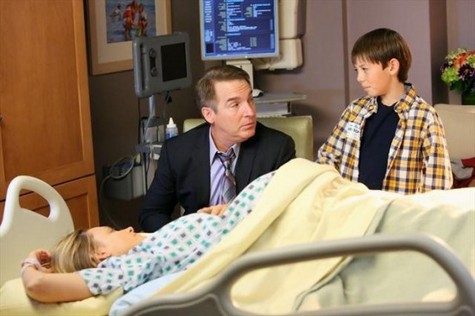 Tonight on ABC a whole new episode of PRIVATE PRACTICE airs called “I’m Fine.” On tonight’s show Sheldon fears the worst in the Saint Ambrose Hospital’s missing girl case. Did you watch last week’s show? We did and we recapped it here for you!

On last week’s show in an episode told from Cooper’s point of view, we followed him from the moment of conception through a nasty fight with Charlotte, which inadvertently threatened the lives of their triplets. Meanwhile, Violet comforted a friend who was being advised to take her partner off life-support.

On tonight’s show during a dark moment in his life, Sheldon finds happiness with a new woman. Meanwhile, he becomes increasingly suspicious about his patient Nick’s involvement in Sarah’s disappearance.

This episode is centered around Sheldon and his life.  The episode starts with Sheldon and his ex-wife at an event.  Sheldon acts though they are a full blown couple, but his ex-wife clearly wants to keep things casual.  Nothing too serious.  Sheldon gets his feelings hurts and assumes that it’s because of his cancer and his ex does not deny that.  She walks away and he meets a cancer patient at a vending machine.

Then at Sheldon’s therapy session he is discussing his patient, the pedophile from the hospital, who will not return his phone calls.  His therapist explains that this issue is becoming an obsession and tries to make him focus on his cancer.  Sheldon doesn’t want to hear that.

Back at Oceanside Wellness, Amelia notices that Addison has a huge diamond ring on her finger.  She realizes what it means and she congratulates her.  Sam is also in the break room with them.  Awkward.  He gets up and congratulates Addie and walks out.

Sheldon is still going through therapy and effectively blames his patient for the disappearance of Sarah.  He feels bad.  It seems that he is doing chemo therapy and meets the cancer patient from the vending machines again.  They are becoming fast friends.

The kidnapper is caught.  He is a janitorial worker at the hospital.  I’m not convinced.

Sheldon’s patient is back in therapy after admitting that he is in love with a 25 year old woman.

Sheldon is actually going through radiation, not chemo.  He is forming a bond with, Miranda, the cancer patient.  It turns out her cancer is terminal.

Visiting Charlotte, who is on bed rest at St. Ambrose, Sheldon almost tells her that he’s been going through radiation therapy every morning.  He chickens out at the last minute.

Back in the waiting room for therapy, Miranda asks Sheldon to lunch.  He declines.

Sheldon’s patient is discussing his relationship with Alyssa.  He doesn’t believe she is happy and that he isn’t really in love like he thought.  Something in his eyes catches Sheldon off guard and the patient tells him he is going to have to end it.

Sheldon goes to the police station to discuss the accused kidnapper.  He tells the detective that he believes he knows who the real kidnapper is.  He really wants them to do something to stop him, but with no evidence there isn’t much they can do.

Back at the practice Sheldon has his patient come in for an earlier session.  He says it is because he is going on vacation and didn’t want to miss their time.  He appears to be stalling and Sarah’s parents walk out of the elevator.  They go on their way and Sheldon and his patient go to his office, but Sheldon first gives the receptionist a note and tells her to make a the call in 15 minutes.

During their therapy session Sheldon asks his patient some questions about how he thought the little girl was.  He says she’s most likely still alive and better off because her parents just argued with each other and she didn’t deserve that.

Sarah’s parents are in Violet’s office arguing again.  The mom is upset because her husband went back to work instead of missing their daughter.

Sheldon finally tells his patient point blank that he knows he took Sarah, but the patient denies it.  He tries to leave and cops are waiting outside for him.  Sheldon tells the officers that his patient is suicidal and that he is placing him on a 5150 hold and he’s taken away.

Sheldon is back at the police station and this convinces them to take action.  They go to his patient’s house and just as it looks like there is no hope they find the little girl.  She is rescued and is reunited with her parents.

Sheldon goes back to the waiting room for his radiation therapy and is upset when Miranda is not there.  He sits and she walks in.  He is upset and says she wasn’t there the day before and before she could say anything he kisses her.