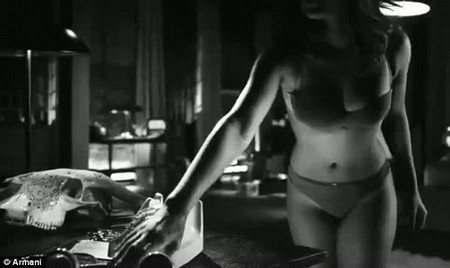 Rihanna uses a body double Jahnassa Aicken as was seen when she was recently in a commercial where she was going around in her underwear and all that stuff. The advertisement was for Armani and it showed Rihanna having a nightmare, dressed only in her unmentionables, then all of sudden, the nightmare was so scary that she decided to slip on a pair of jeans.

I’m not surprised to say that our source revealed that her boob and butt shots were not really hers, but in fact Rihanna uses a body double, Irish model Jahnassa Aicken. I knew that something was off when I actually, for the first time, found Rihanna attractive in this ad, but now that I know it is a body double, Rihanna is going back to being just, meh.

Jahnassa signed some papers which didn’t allow her to talk about her being Rihanna’s “body double”, but a secret source (there’s plenty of them I know) said “Jahnassa’s torso, body and bum appear in parts of the ad. It’s shocking Rihanna wanted one considering she loves posing with no clothes, plus she’s in great shape.”

It would appear that Rihanna’s people found this body double while shooting her banned “We Found Love” video in Northern Ireland – yes when she thrown off a farmer’s field for behaving like a slut. She was first tested as a stand in, then they made her the double in the Armani ads.

I’ve never found Rihanna attractive at all and I don’t know how other people can. Basically, using a body double only proves that Rihanna lacks confidence in her body and doesn’t find herself attractive, what a fake!